Jessica Simpson may have a new boyfriend and who he is should, frankly, surprise! 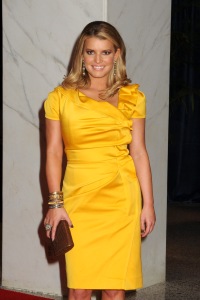 Do you hear that?

The Oscar-nominated star of The Hurt Locker, who first rose to fame as Jeffrey Dahmer in the indie Dahmer, is reportedly dating Jessica “Sexual Napalm” Simpson.

Simpson and Renner were first linked together in March when they were spotted at a cocktail party hosted by Madonna’s manager Guy Oseary. Tabloids insisted Renner “spent the night hitting on Simpson like crazy. They were really flirting up a storm.”

But Renner claimed they only spoke for three minutes and were merely talking shop about Ken Paves, celebrity hair stylist and Simpson’s BFF, who styled Renner’s mother’s hair for the Oscars.

We wonder what the excuse will be this time now that Us Weekly is reporting that the pair has been “on the sly for months.”

Proof? Last weekend, Renner, 39, and Simpson, 29, attended the White House Correspondents’ Association dinner in Washington, not together, but they were both in attendance. No big whoop, right? Well, later they were seen entering Washington’s Saint Regis Hotel around 2:45 am, Sunday morning. Again, not together, but they walked in about 30 seconds apart so, some say, they could keep their couple status under wraps.

Could this be a case of too much innuendo and drawn conclusions? Or are these two secretly making whoopee? If so, we seriously hope Jeremy can get that girl to brush her teeth more often. Listerine and a sweater rub-down are NOT dental hygiene.

Conveniently, the report that Jessica has a new man comes after everyone was buzzing about her run-in with her ex, Tony Romo, and his new girlfriend, Candice Crawford, at the same event, while Simpson was solo. It makes us wonder if this is the handiwork of Papa Joe and Renner is an unwitting casualty of the Simpson spin machine.