Nearly two weeks after being rushed to the hospital with a massive brain hemorrhage, Bret Michaels has been released from the hospital. The rocker-turned-reality star is expected to make a full recovery, but he’s still got a fight ahead of him. 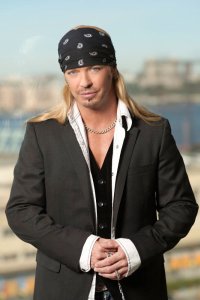 “He has been recently discharged and he continues to receive therapies,” Michaels’ chief neurologist, Dr. Joseph Zabramski, said in a press conference May 4.

“We continue to monitor his laboratories daily, and we’re adjusting his medications, and he is making a good recovery. I really expect that he will fortunately make a 100 percent recovery. He’s just one of those lucky people.”

Word is Michaels is “still very sick right now” but should start to feel better in about ten more days and after four to six weeks of physical therapy, he should be back on his feet.

“He can walk, but he’s not walking very well,” the doctor said of his condition. “He’s talking very well. He’s mentally aware of everything that’s going on.”

Among side effects that the diabetic encountered during his stay in the hospital was a blood clot at his brain stem. Until the clot drains, he’ll suffer severe irritation in his head, neck and spine. That means it’s not likely we’ll see the rocker back on stage by the end of the month, as he’d hoped.

His people have been busily rescheduling dates for his Roses & Thorns tour and released word that we’d see him back on stage by May 26 and that he’d make it to the May 23rd live finale of Celebrity Apprentice in New York City, but his doctor isn’t as confident.

“What I made him promise me is that he would make no promises. Of course, I’ve heard that he’s made promises,” Zabramski said. “He’s still very sick right now. There’s no way he’d be on the road right now…We’ll assess him in two weeks. He’s a very determined person. It depends on how quickly he recovers.”

The doctor was most impressed with Michaels, repeating that he was one lucky and determined guy.

“Bret’s sheer will to live and fully recover is undeniable,” he said and then later added, “This is one of those rare instances where we’re pleased that we can’t find the cause of the bleed. Ninety-five percent of patients with this type of hemorrhage go on to make a complete recovery and they have no higher risk than anyone in this room to have a repeat.”