Following in the footsteps of Disney alums before her, Miley Cyrus is done playing good girl. This isn’t exactly news, but her new video for Can’t Be Tamed makes it official. Her vamping winged cage dance is certainly hot. The question is, is it too hot for a 17-year-old? 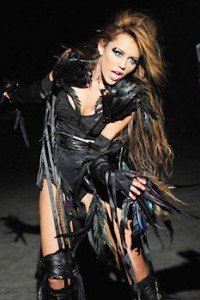 In the video that dropped May 4, Cyrus is a sexy endangered species being presented to the world. Wearing hot pants and massive black wings, she’s smoking hot as she writhes through the poles of her cage, vamps sexily with dancers of both sexes (we think!) and shakes her groove thing through a natural history museum.

SheKnows has to admit, it’s a fantastic video… but then we realize we just used the words “smoking hot” to describe a 17-year-old. Hmmm.

Cyrus has made headlines for her Party In the USA pole dancing at the Teen Choice Awards, showing her cleavage to the Queen of England and other such sexy mayhem. There was also that uproar about the infamous Vanity Fair shoot over two years ago.

Critics have had much to say about the child star’s every move and this video seems to be her response. The message is clear: She’s growing up, we can’t cage her in and we the people better be ready.

“The video isn’t about being sexy or about who can wear less clothes. It’s about explaining the song and living the lyrics… I don’t want to be in a cage. I want to be free and do what I love,” Cyrus said. “It’s the first step to growing up, but I think it’s done the right way. I’m really proud of it.”

Some critics and fans are not quite sure she should be, but we’ve seen this controversy come up more than once.

Britney Spears raised similar chatter with her transition from Disney sweetie to under-aged hottie. Her album Baby One More Time came out when she was the same age as Cyrus, and who can forget that naughty school girl video for the title track? By the time Spears did that snake dance to I’m a Slave 4 U a few years later, she was legal and we were used to it.

That comparison may mean good things for Cyrus’ musical career, but we all know how things went in Spears’ personal life. At 28, she already has a long history with drugs, breakdowns and failed marriages.

Spears’ New Mickey Mouse Club pal Christina Aguilera also raised brows when she came of age by swinging her young hips for Genie in a Bottle. She’s managed to carve a more positive path than Spears, so there’s hope for the young and sexy Cyrus.

It bares mention that Justin Timberlake also jumped from Disney to ‘N Sync to being the man who brought Sexy Back. But since he is a man, that was never controversial. Another topic, all together!

Whatever we all think of this hot video, there’s no turning back. Cyrus’ Hannah Montana days are over. Disney is behind her and she Can’t Be Tamed.

See the video for yourself and weigh in: Is it too hot for 17?