SheKnows: Gwyneth and Scarlett, could you talk about your roles as strong, intelligent women in this film? You are certainly sexy but there is much more to your characters.
Scarlett Johansson: Well you know, I don’t think I have ever really seen a film of this genre, where the female characters’ sex appeal sort of came second. I mean of course they’re sexy characters. When you have a sexy secretary, or a girl swinging around by her ankles in a cat suit, you know that’s innately sexy, but the fact is that these characters are intelligent. They’re ambitious. They’re motivated and calculated to some degree. A movie where I would probably have to be just a pawn in a story of a whole bunch of men fighting it out and rolling around and getting down and dirty (wouldn’t appeal to me). When you are there to be the vision in the tight cat suit it’s sort of a boring thing to me. And I think that (director) Jon (Favreau) really made that very clear in the beginning. He felt that, as far as Black Widow was concerned, or that Natalie was concerned, she was mysterious and nuanced and something to kind of peel back the layers to — that there was something there. 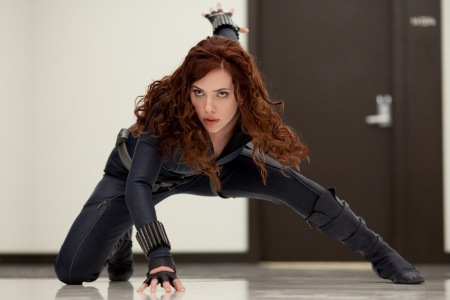 He wanted to do that and I think that is why this film is much more dynamic for me as an audience member. I have never really been a fan of this genre really and I think because it is really one note and kind of explosive. I think that because Gwyneth and I can sort of be the brains behind the operation in some aspect, there’s kind of a happy medium there. I think it adds to the charm and the charisma of the film and the finished product.

Gwyneth Paltrow: I agree with Scarlett. I think that it’s a very smart decision actually to have women that are capable and intelligent because it appeals to women. You know, so it’s not only a film for 15-year-old boys. It’s a film that can relate to a lot of people on a lot of levels. A lot of my girlfriends like it because of the romance or like Scarlett is in the trailer and it is appealing. “Ooh, who is she?” and it doesn’t look gratuitous. It looks like there are interesting women in the movie. And certainly, in the first one too, my character is quick and she’s articulate. So, when you take your kid when you’re a mom it’s really fun to watch as well. So it’s nice to see women who are kind of inspirational and smart, sexy, all at the same time. 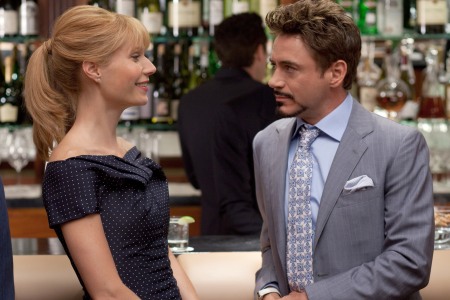 Scarlett Johansson: (The film is) awfully kind of old fashioned actually, in the best sense of the word. These characters are sort of like those fabulous femme fatales of the golden age of Hollywood; the Bette Davis more than the Jayne Mansfield, you know, which I think is so much more dynamic to watch.

SheKnows: Gwyneth, Pepper seems kind of stoic in this sequel. She’s very supportive, yet in charge. What is your take on what runs through her mind?

At this point, the giant Iron Man 2 poster in back of the actors falls completely down, jarring everyone. 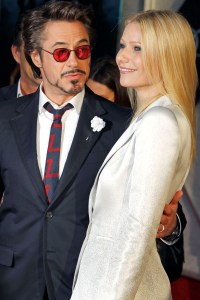 Robert Downey Jr: Can we put that back up? Let me at least get my image back up. Hold on [laughter].

Robert gets up and holds up the poster with arms high above his head in an Iron Man pose. Scarlett is laughing and Gwyneth tries to hold it together.

Gwyneth Paltrow: I’m sorry. Can you just refresh my memory on the question? (To Robert) Yeah. Just stand behind me and hold it up. Oh, the inner monologue with Pepper…

Robert folds up the poster until just Gwyneth’s giant poster head, as Pepper, is showing. He holds it behind her head pointing to it. She doesn’t see him. Now we are trying not to laugh.

Gwyneth Paltrow: Pepper is trying to hold it all together. [Robert is still goofing off with the poster behind her. She turns around and sees him]. See, without Pepper, the woman, this is what you get. Male bullshit, bumbling around and they can’t even hang a poster [everyone is laughing]. If Pepper was doing this job, it would be a much different story. I think Pepper tries to hold it all together. She tries not to be reactive and steer him in the right direction. She’s really like the great woman behind the man. I think that’s what runs through her mind. [To Robert] You dropped the poster!

Robert Downey Jr: [Sitting back down] I got a little self-conscious, strangely.