SheKnows zeroed in on Iron Man 2’s hot ladies Pepper Potts (Gwyneth Paltrow) and the sexy Black Widow (Scarlett Johansson) for a tell-all sit-down in Beverly Hills. The two stars, both red-heads in the film, are back to blonde and the girls were wearing sexy, pencil-skirted gray frocks that were just similar enough to complement each other…classy! 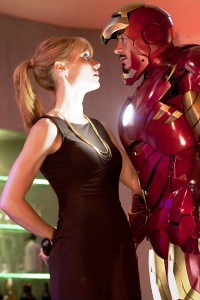 At this Iron Man 2 press day, Robert Downey Jr was indeed a hero as he held up a giant fallen movie poster behind Gwyneth Paltrow’s head while she finished answering a question! Earlier, we overheard Paltrow revealing that her family was stuck in New York waiting for the Icelandic volcano ash to clear over their London home!

A lot of the comic book fanboy dialogue during the press event left Paltrow in the dark, “I don’t even know what they’re talking about,” she said. However, she was happy to talk about her role in this sequel to the mega-popular superhero actioner.

Paltrow and Johansson play sexy and brainy rivals for the attentions of Tony Stark-Iron Man who, in true masculine style, is very surprised when, later in the film, the two gorgeous women can work together quite well to save the day while he and his buddy Rhodey have to duke out their differences before they can get on with business. Let’s examine that, shall we?

SheKnows: Ladies, the Tony character is a little surprised that you two can work together quite well later in the movie. Who do you think could better work together to save the world, two women like Pepper and Natalie (Black Widow), or two buds like Rhodey and Tony?
Gwyneth Paltrow: [laughs] Well, if Scarlett and I were doing it, the body count would be different, less bloody. 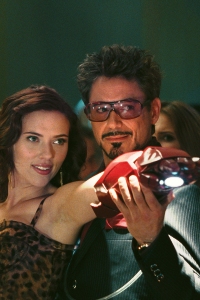 Scarlett Johansson: We’d just stack them. I don’t know, but with the brains and the muscle and the beauty and the blond, I feel like we maybe have a greater chance.

Scarlett Johansson: We are, it’s true. Unstoppable, you know. I feel like if I could wield the guns and the karate chop movements and you can like…

Scarlett Johansson: Yeah! You could be the brains behind the operation. That could be your super power.

Gwyneth Paltrow: [sternly] ‘I will out-think you.’

SheKnows: Gwyneth, you have a lifestyle website called Goop.com and give some very good advice. You look great so what is your advice for losing weight?

Gwyneth Paltrow: Actually not this coming week, but next week, the Goop Newsletter will be about my “Iron Man” training regimen and how I lost weight and got in shape to play this part, so you can check it out.

SheKnows: There is a very flirty banter going on between Pepper and Tony in the film and it’s great but, we finally get the kiss! How was shooting that scene and, at long last, getting those characters to lock lips?

Robert Downey Jr: I couldn’t get her off of me. It was embarrassing!

Gwyneth Paltrow: [laughs] It was great because both my husband and his wife were right there.

Robert Downey Jr: She said to me that I didn’t know what I was doing — like it didn’t feel good. And I’m like, you know what? First of all, we’re all friends, so what would be creepy is if I was coming off all sexy to you. By the way, I’ve done that in movies and it creeps them out. So why am I going to creep you out? [Smiles] Despite what she said on set, she still thinks about it. 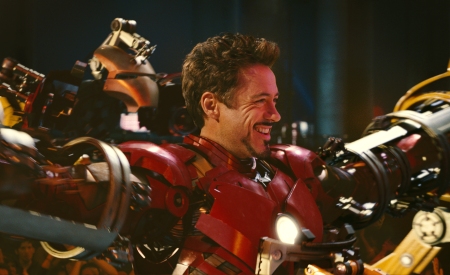 Up next, Scarlett dishes her first action film and Gwyneth is saved by Robert!