Mother and Child premieres May 7 and stars Annette Bening, Naomi Watts, Samuel L Jackson, Kerry Washington and Jimmy Smits in a classic that arrives in time for Mother’s Day.

Related story Why Was the Game of Thrones Prequel Starring Naomi Watts Cancelled by HBO?

Mother and Child weaves several storylines in a Robert Altman-esque method that centers on one common thread: Motherhood. 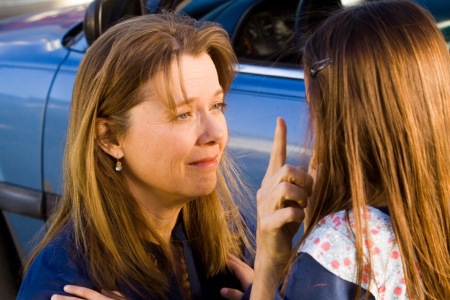 The film chronicles the lives of three mothers, each of whom has adopted a child or given a child up for adoption, as they learn that the complexities of that endeavor don’t end with signing the papers.

The first Mother and Child story follows Bening, whose character (Karen) had a baby at 14 and gave the child up for adoption. Bening’s character has been haunted by the “loss” of her daughter since that fateful day.

Watts is Elizabeth, herself an adopted child. Although she is highly successful in her career as an attorney, she is painfully lonely in her personal life.

Meanwhile, Lucy (Kerry Washington) and her husband are commencing their adoption journey as Mother and Child covers the many angles in the adoption maze.

As the film progresses, audiences witness Bening living with her elderly mother Nora (Eileen Ryan) and making her living as a physical therapist. Although pained by missing the daughter she never knew, Bening is hardly the model daughter herself: She and her mother do not speak.

What’s so fascinating about Bening’s character is how she is mentally communicating with her lost child. She has a journal full of letters and thoughts addressed to her daughter. Clearly, her pain over the adoption runs deep.

Bening’s dilemma is similar to the other characters in Mother and Child.

Showcasing that pain is our exclusive clip in which Washington illustrates the emotional turmoil that can result from the entire adoption process, regardless of the role the individual plays in the process.

Director Rodrigo Garcia reported that he initially set out to make a film free of specifics. “In the beginning, there was no plot, only a vague idea about two strangers who longed for each other, and how that longing had shaped and misshaped their psyches,” he says.

The film serves to explore the adoption experience from all perspectives. “(Mother and Child) was to be a story of the complicated feelings and intertwined destinies of two women, then three. None of it was based on my personal experience,” says Garcia, “but I suppose it was born of every parent’s fear of being separated from a child by time or illness or accident.”

more on Mother and Child’s stars