Nine premieres on DVD and Blu-ray May 4 with an all-star cast for the ages. From the director of Chicago (Rob Marshall) comes the stage-to-screen adaption that set Broadway’s lights afire upon its debut in 1982. Nine ran for 729 performances on Broadway and is based loosely on Italian director Federico Fellini’s film 8 1/2. 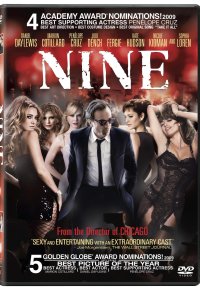 Lewis’ Italian film director Guido Contini is in a bit of a rut. He hasn’t had a hit in years and has spent more time chasing women while cheating on his wife instead of working on his fading career.

Oscar-winner Cotillard is Lewis’ struggling wife, who continues to love her man even as he strays. She is dealing with a bevy of beauties including Fergie, Cruz, Hudson and Kidman — all pulling on Lewis’ wandering heartstrings.

Meanwhile, Lewis is trying to get his movie mojo back and looks to any muse he can for some sort of inspiration. He will certainly find it in Nine.

Nine’s Blu-ray and DVD special features abound, including a priceless commentary provided by director Marshall. The star of the star-studded film, Lewis, gets his deserved due with a documentary short, The Incomparable Daniel Day Lewis. Also, with all these fantastic femme fatales, the Women of Nine featurette is truly fab.

In addition, the Blu-ray release includes a few extra features, most notably the look at a legend with Sophia Loren Remembers Cinecitta Studios and a full-cast chat courtesy of the Screen Actors Guild.

SheKnows presents an exclusive clip from the home video release showcasing the painstaking effort it took to capture the dancing scenes in Nine. As any musical worth its weight, Nine’s production numbers are as elaborate as they are musically explosive.

Penelope Cruz: The SheKnows interview
Why did Kate Hudson get breast implants?
Nicole Kidman and Daniel Day Lewis on the set of Nine