Ashton Kutcher and Katherine Heigl are Killers and SheKnows is proud to premiere the film’s new poster! 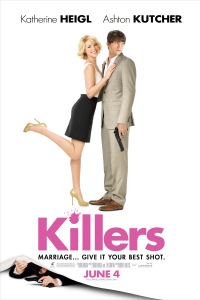 Kutcher and Heigl are newlyweds set to begin a life of wedded bliss. There’s only one problem, Kutcher’s character is an international assassin whose career is catching up with his marriage.

Killers, not your usual romantic comedy, premieres June 4, with a tagline that could not be more perfect: Marriage…give it your best shot! Indeed.

Heigl plays Jen Kornfeldt, fresh from a break-up. Jen is convinced she will never find love again like she had. When her parents offer to have her come with them to the French Riviera, she decides to go, thinking the vacation will not add up to much except quality time with the parents.

It is there, under the romantic sunshine of France, that Heigl’s Jen meets Ashton Kutcher’s Spencer Aimes.

Fast forward three years and Kutcher and Heigl’s characters are newlyweds living her dream life. Then, on the morning after his wild and crazy 30th birthday party, Aimes’ past catches up with the couple.

Kutcher failed to mention to Heigl when they met that his character is an international spy with a very specific title: Hit man.

Read on for the latest trailer from Killers and a full-length copy of the killer Killers poster!