Yet another celebrity has been caught with his pants down: This time David Boreanaz is fessing up to the dirty deed. 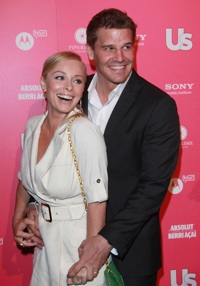 The actor, best known for his work on Buffy the Vampire Slayer, Angel and Bones, came clean to People about his multiple affairs after one of his mistresses threatened to go public if he didn’t pay her off.

Boreanaz has been married to Jaime Bergman for nine years, pretty much none of them faithfully. “Our marriage has been tainted with my infidelities,” Boreanaz told People. “I just want to be open and honest. I was irresponsible.”

“I was associated with a woman who I was involved with and had a relationship with,” he said. “She asked for money. I felt as though I was being blackmailed or there was some sort of extortion.”

“On April 23, the woman left a very threatening message that she was going to the media, that my client had not given her enough money,” Singer told TMZ. “It is true I did leave a message for the woman because of the extortionist threat she left with my client. On Monday, I received a call from Gloria Allred and she told me the woman was looking to get paid at least six figures.”

read on for more celebrity cheating