Bethany Hamilton is an inspiration, although don’t call her that. “I don’t see myself that way,” she said in our exclusive interview. The surfing sensation lost her arm to a shark attack and has inspired millions by her determination to get back into the water. If her story sounds like a Hollywood movie, you are not alone. Movie producers snapped up the rights to her inspirational story and the film will hit theaters next year starring Carrie Underwood in her film debut. 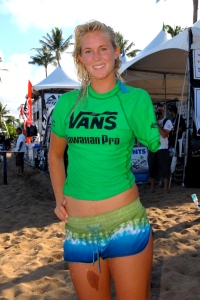 Hamilton visited ABC’s Extreme Makeover: Home Edition May 2 and taught the Carr family’s children how to surf while their home was being completely overhauled by Ty Pennington and his team of altruistic builders. The surfing sensation sat down with SheKnows to discuss her accident, her recovery and how Hamilton’s parents serve as her inspiration. “Without them, I would not be here,” Hamilton said.

SheKnows: First of all, how was your Extreme Makeover: Home Edition experience?
Bethany Hamilton: It was really fun — it was a great experience. I got to meet up with the Carr family. They’re fun, really sensational and just a cool family. The parents actually adopted three kids from Kazakhstan. Ryanne, she’s the oldest, she’s missing three limbs, and she’s just a warrior. She was so strong surfing — we could barely get her out of the water! She’s just such a little adventurer. It was really fun hanging out with her. And then Rina, who’s three years old, is missing a leg. She’s just adorable — I just adored her so much. She’s just a little trooper and doesn’t even notice that her leg’s gone! Nicholas, her brother, he’s really cute. It was really cool hanging out with them and getting to know them.

SheKnows: For you, who is an inspiration to many, I would think that this visit was inspirational for you.

Bethany Hamilton: It definitely was. It was a wake up call. Losing an arm is kinda lame at one point, but at the same time, so much good has come out of it. I watch them and they’re just such little charger kids — they’re just going for it. It’s pushing me to go forward even more. 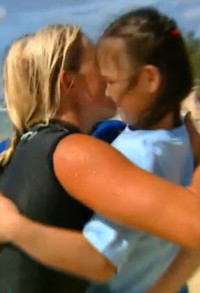 SheKnows: It’s been a while now, but are you comfortable with the word inspiration, and being one?

Bethany Hamilton: I guess! I’m pretty used to it. It’s hard to think of yourself as an inspiration, though. Now, Ty (Pennington) and his team, they are an inspiration to me, so that was cool. That was the best part — just hanging out with them.

SheKnows: I’ve talked to him before, and he’s just such a joy and a firecracker, but what was it like hanging out with Ty?

Bethany Hamilton: I actually didn’t get to hang out with him! Everyone asks me and I’m like “Ty who?” I think he was back in Texas working on the house or something.

surfing: All in the family

SheKnows: What was it for you that first called you to surfing, just in general, way back at the beginning?

Bethany Hamilton: Well, I grew up in Kauai, Hawaii. Both my parents actually moved there to surf and my two older brothers are ocean wave riders, too. I guess it was kind of automatic! Of course, I fell in love with it when I was four or five years old and I’ve just been surfing ever since. 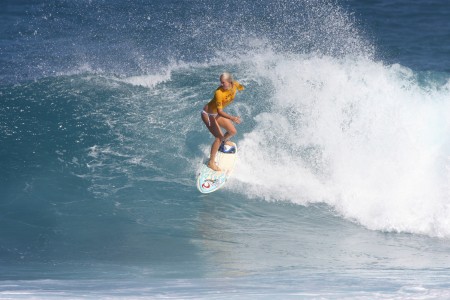 SheKnows: After your accident, you dove right back in the water. Was there ever a moment or two that you didn’t want to?

Bethany Hamilton: It was more that I was unsure if I was even going to be able to surf. I definitely had the desire to at least give it a try. It was just too big of a passion of mine to stop then.

SheKnows: Being an inspiration to show what people who have lost limbs can do, was this specific Extreme Makeover: Home Edition episode, essentially, a slam dunk for you because it was a chance for you to raise more awareness?

SheKnows: When I asked you before about being an inspiration, you answered with something like, “It’s me — I’m just doing what I do.” With that mindset, was it a little weird to know that they’re making a movie about you?

SheKnows: I wanted to ask about your parents. There are so many avenues that you could have gone down and they encouraged you. What role would you say that your parent’s played to get to where you are today?

Bethany Hamilton: Well, both of my parents are surfers, of course, so they understood where my passion for surfing was at and I guess they saw the talent that I had. They really encouraged me and took me surfing everyday, took me to swim class to get stronger, and then paddling and being more comfortable in the ocean. They really were there for me every step of the way. Beyond my surfing, they encouraged me in my love for God and Jesus Christ and just who He is and what He has done for me and I know that through Him, I wouldn’t have been able to do all that I’ve done. I just have an amazing family. My two older brothers were there for me every step of the way, too. It’s cool. I’ve had a supportive family and it’s just been awesome.