Derek Hough is well on his way to hoisting another Dancing with the Stars Disco Ball trophy with his partner, Pussycat Dolls’ lead singer Nicole Scherzinger. 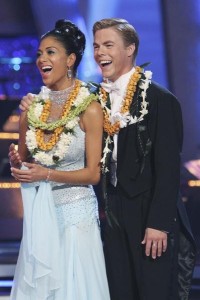 Although Hough misses his sister, former professional Dancing with the Stars dancer Julianne Hough, who is conquering Nashville with her country music career, Derek hinted Julianne may be back.

Hough sat down with SheKnows Entertainment to exclusively discuss how this season of Dancing with the Stars is the best ever.

SheKnows: You’ve been a part of Dancing with the Stars since season five. What do you make of this most successful season ever?
Derek Hough: This cast has been particularly great. There has been a great energy this year from not only the cast, but the crew and the production. It almost felt like this was our first season, you know? That has been quite exciting. It has actually flown by. I can’t believe we’re going into week seven. It’s pretty amazing. I feel like normally by this point, I’ve lost 16 pounds and I’m barely able to walk. I’m actually staying healthy because the energy of this season has carried me through. It’s been fantastic.

SheKnows: Of course you do it because you love to dance, but ratings are always a good thing. When I talked to Tom Bergeron last week, you guys had just beaten American Idol for the first time. When you achieve something like that, how does that resonate with you?

Derek Hough: It resonates hugely, especially after last season. Last season there were huge drops in numbers for our show. And it wasn’t just the drop in numbers statistically, but the energy of the show. It was starting to feel old and dated. Everybody felt it. We all sat around and talked to each other and asked what was wrong with last season. What was it? I think we were missing the reality of it, in the sense that celebrities struggle and we need to show them break down.

Derek Hough: Yes! You need to see the truth behind the show. I think with this season, we have really captured that with the great cast, great performances and great stories that allow the audience to connect with the celebrities. I think that’s important. 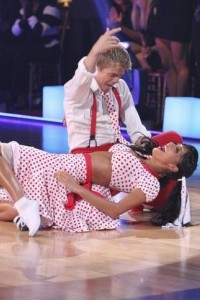 Inside Dancing with the Stars

SheKnows: How involved are the professional dancers in the overall production of Dancing with the Stars?

Derek Hough: We choreograph everything from our own numbers to the artists that come in to perform. For instance, I had an idea for a routine that I would start playing guitar and then Mark (Ballas) would play guitar — we did a whole routine with Chelsie (Hightower) that was a Paso Doble. We give them ideas and they choose whether or not to use them. But, they’re always grateful for ideas. It’s tough. We’re in season 10, so producers are always willing to trying something different. They’re very open.

SheKnows: When anything’s successful, they’re always bringing in new blood to keep it fresh. How has the addition of new dancers worked for you all over the years? How do you think it’s affected the dynamic of the show?

Derek Hough: It’s always good to bring new people in. You definitely get a new vibe. For example, I was brought onto the show in season five, as well as my sister (Julianne Hough) in season four. You have to change it up sometimes and it gives us reason to not be so complacent. It’s always a good dynamic.

Visit our sister site, Reality TV Magazine, for the remainder of our Derek Hough interview including his comments on the chance his sister Julianne will return next season!