Lance Armstrong is going to be a father for the fifth time! 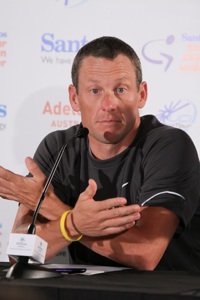 It isn’t enough for Armstrong to be a record-setting champion cyclist — he won the Tour de France seven times in a row — and a medical miracle after surviving testicular cancer that metastasized to his lungs and brain. It wasn’t even enough to create another medical miracle when his girlfriend, Anna Hansen, conceived his child naturally after cancer and chemo was believed to have cost him his fertility.

Nope, he had to go do it again. His Livestrong Signature Ball of Steel (patent pending) has made another miracle baby!

“Getting questions today about someone I’m following, a certain @Cincoarmstrong. What to say? Yet another blessing in our lives. I cannot wait!”

What does @Cincoarmstrong have to say for his-herself? Two Tweets so far:

Armstrong has three children with his ex-wife Kristin, conceived through artificial insemination with sperm harvested before his cancer treatments. He and Anna’s son was born in June 2009.