Jenna Jameson has changed her tune and now says Tito Ortiz never laid a hand on her. 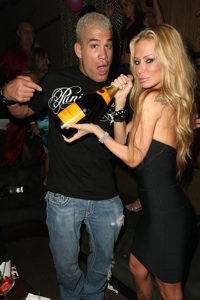 While Tito maintains his story that he found two OxyContin pills on Jenna, he now says he may have jumped to conclusions after Jenna tested negative for any drugs.

“I am definitely not addicted to OxyContin or any drug,” Jenna told TMZ.

Attorney Ronald Richards said, “The lab tests clearly exonerate Jenna Jameson of any hint, iota, or suggestion that she ingested or was under the influence of any opiates or controlled substances.”

“Statements made by anyone to the contrary are completely impeached by the results from this prestigious testing facility.”

Jenna told US Weekly, “The events of Monday show how things can get tragically out of hand when people say things in the heat of the moment. My father was trying to diffuse a private issue between two people. Unfortunately, what actually happened has now been dramatically distorted and misinterpreted and remarks that both Tito and I made after the police arrived reflect the state of shock that we were both in. Tito and I love each other and I want him back in my life. He’s a fantastic father and I’m confident we can work through this challenge.”