The rumor mill is heating up with word that Alicia Keys is pregnant! 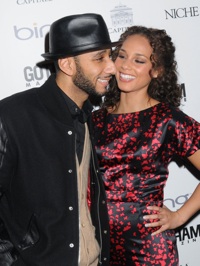 The singer-songwriter has been dating music producer Swizz Beats for years, since he cheated on and left his wife Mashonda for Keys. The couple tried to keep their relationship on the DL, but it was the worst-kept secret in the industry — until Mashonda ripped into Keys for stealing her man.

In fact, Mashonda totally put Keys on blast and released a letter to the media on the home-wrecking in question, excerpted below:

“The 1st time I meet AK, my husband introduced us to each other at an event. (I have no choice but to call him my husband, until he is not anymore) In the messages that I sent to her (AK), I made it very clear that on the contrary of what she might be hearing, I am still married to my husband, living with him and just had a child. It’s been two years and I still have not received a response. What I do receive, is constant displays of selfishness to me and my son.

“I believed in her until I found out she was possibly sleeping with my husband. The affair was denied by both, until it was finally admitted months later.

“My concern with AK is no longer the fact that she assisted in destroying a family but that she has the audacity to make these selfish comments about love and wanting to be with someone, even after knowing their situation.

“If you are reading this Alicia, let me start by saying, you know what you did. You know the role you played and you know how you contributed to the ending of my marriage. You know that I asked you to step back and let me handle my family issues. Issues that you helped to create. Just know that as a woman, I expected so much more from you. You have no idea how much pain I was caused because of this affair.”

Now a source close to the couple claims Keys is pregnant, after Swizz Beats’ January marriage proposal. Of course, the couple began their own affair shortly after the birth of his last child with Mashonda, whom he has since divorced.

Has no one told Keys that if your relationship begins in lies, it will end in lies?

read on for more celebrity news