Lindsay Lohan may be heading to the slammer over parole violations. 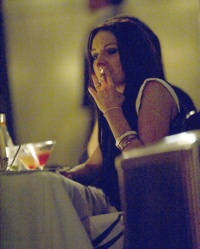 The annoying has-been was given the pass of a lifetime when a judge gave her probation on a DUI arrest last year. The terms were easy: attend alcohol education class at least once every seven days.

Lohan, who has no trouble going to clubs and drinking five out of seven days, has had a tough time fitting the classes into her busy party schedule.

Judge Marsha Revel told Lindsay in no uncertain terms at her sentencing that if the once-was actress did not abide by the terms of her probation, then she’d be sent straight to jail.

The school Lindsay was supposed to attend only reports absences to the state if the student misses classes for more than 21 days in a row. Lindsay apparently knew this and would attend exactly every 21 days, clearly violating the judge’s order.

Lohan has a progress meeting on May 20 at which it will certainly come out that Lindsay is violating the terms of her parole. Since the judge made it clear that if that happened Lohan would be heading to jail, we hope she looks good in orange. At least jumpsuits are in this season.

Shawn Chapman Holley, Lohan’s lawyer, says he doesn’t see what the problem is. “We have received no negative written report from the program and contend Ms Lohan is therefore in compliance.”