Sandra Bullock is divorcing Jesse James and adopting a baby! 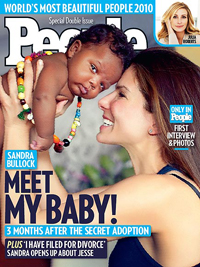 The Academy Award-winning actress confirmed the news to People.

Mere days after Sandra won her coveted Oscar, a scandal of Tiger Woods proportions broke and shattered Sandra’s world: Jesse had affairs with multiple women over the course of their nearly five-year marriage.

What makes it even harder for Sandra is that she and Jesse brought home a baby in January — an adoption process begun four years ago. The couple had decided to keep the news from everyone but the closest family and friends until after the Oscars, and the announcement was pushed back further by the scandal.

“He’s just perfect, I can’t even describe him any other way,” Sandra said proudly. “It’s like he’s always been a part of our lives.”

“All I said when I met him was, ‘Oh, there you are.’ It was like he had always been a part of our lives,” Sandra said.

The days after revelations of Jesse’s multiple indiscretions came to light were dark for the new mother. Saying she “had no idea about anything” Jesse was doing with these other women, “I did the only thing I could do, and that was to pack enough clothes to live on, get all of Louis’ things and get out of town. My main concern was Louis.”

The initial plan was for Sandra and James to be parents to Louie together. Will Jesse have any kind of formal parenting role anymore? “I will be adopting as a single parent. Anything else will be taken day by day,” she said.

But there is still the very close relationship she has with Jesse’s kids from previous relationships to deal with. “I don’t want to know what life is like without those kids… Whatever we need to do, in the healthiest way, we are going to be co-parenting,” she said.

“I really don’t know how our paths will intersect in the future, but the father I have known Jesse to be with all the kids is one that I hope Louis can experience one day, no matter how Jesse and I go on with our lives.”