On the April 27 Glee, Will hits the local roller rink to find wacky April Rhodes (returning guest star Kristin Chenoweth). After a Romeo and Juliet duet, Rhodes promises to do her best to help Will save the Glee Club. 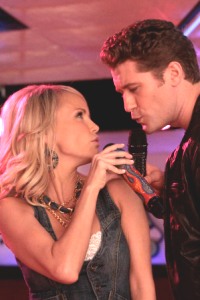 Meanwhile, Kurt tries to make a love match for his dad, Burt (Mike O’Malley), but his choice in lady may cause problems between him and one of his best pals.

Folks are still humming over Glee’s Power of Madonna episode and the show continues to make headlines with its guest star talk.

The newest chatter has head honcho Ryan Murphy considering a Britney Spears episode after her manager launched a Twitter campaign to get her on the show. “I’m interested in the Britney Spears idea. I’ve always loved her,” Murphy told EW.com. “I’m entertaining it. I think young kids would like that.”

“I actually ran into Courtney Love the other day and talked to her,” Murphy revealed. “She’s interested. I would love to have the kids do a Courtney Love episode one day. The key is the songs in the catalogue have to have a certain degree of theatricality.”

That’s about what he had to say about a potential Jennifer Lopez episode. Back when SheKnows visited the Glee set earlier this year, Murphy revealed he’d love to cast Jennifer Lopez as a lunch lady, but he won’t just throw a big star into McKinley High action without good reason and appropriate story.

That means we may have to wait it out and enjoy guest stars like tonight’s Broadway baby, Chenoweth.

“I sat down with Ryan Murphy and we talked about me doing something on Glee — we want to do it,” Lopez confirmed during a recent visit to Ellen. “They have it all mapped out for the next like, eight episodes. So he’s like, ‘Let’s wait and do it really right when you do come on.'” 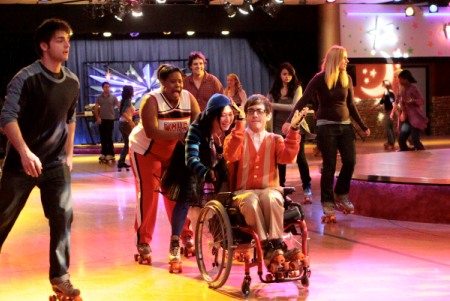 It’s not really surprising everyone wants to get into Glee. Not only does it look like a fun time, it’s good for sales. Since the big Madonna episode, Glee’s Power of Madonna album has been dominating iTunes, while Madonna’s greatest hits album Celebration has jumped up to number 28.

Meanwhile, the show’s third soundtrack is due out May 18. Word from MTV is that the album will feature guest stars Chenoweth, Olivia Newton-John, Neil Patrick Harris and Idina Menzel and includes tracks from Lady Gaga, Aerosmith, the Beatles, Kiss, Beck and All-American Rejects.