Eclipse arrives in theaters June 30 and SheKnows Entertainment has your final preview. The battle for the heart of Bella (Kristen Stewart) rages on as imminent danger waits on the horizon to permanently affect the lives of all of those in Fork, Washington. 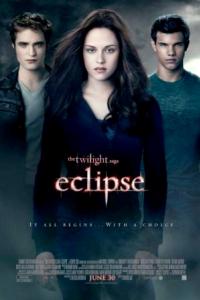 In the new trailer, Stewart’s Bella is clearly not torn between her love of the vampire and her feelings for the werewolf, although Jacob clearly harbors his crush! Audiences all know how this story plays out, but it is in the Eclipse book that Twilight fans first realize the promise of what will come in Breaking Dawn, the final Twilight chapter.

What is also put front and center in the final Eclipse trailer is the all-out war that brings Jacob’s werewolf family and Edward’s vampire family together.

Dakota Fanning was the lucky Eclipse star to reveal the latest and last trailer when she appeared on the Oprah Winfrey Show.

Eclipse famously has the action piled high, but don’t think that Stephenie Meyer’s third installment would quell any of the romantic sparks. Kristen Stewart, Taylor Lautner and Edward himself, Robert Pattinson, form a cinematic love triangle that has set hearts afire since it was first born on the page in Twilight.

The third installment should Eclipse the previous two by bringing Edward and Bella closer to together while still letting audiences know that fires still burn inside Jacob for the woman that supernatural beings simply adore.

For Twilight fans, the calendar still has some months to pass before Eclipse’s June 30 premiere. But as Summit Entertainment has so effectively done since the first Twilight installment is tease its audience to the point of a vampire salivating for human blood.

Since they are promising this is the final trailer, look for the next first-looks from Summit into Eclipse to be clips and never-before-seen stills. And of course, SheKnows Entertainment will have all of the Eclipse news and views any Twi-hard could ever require.