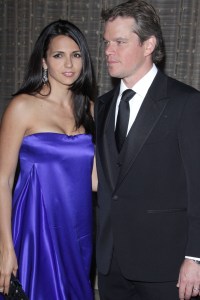 Someday Damon will be able to bring his kids over to Brad Pitt and Angelina Jolie’s house and they’ll have enough players for a hockey game.

With any luck, the new addition will be a boy who might one day inherit his father’s mantle of Sexiest Man Alive. If the couple welcome another girl, Damon will outpace Tim McGraw as the most female outnumbered celebrity father in Hollywood.

McGraw currently has three daughters with wife Faith Hill. And no, Jon Gosselin does not count because he’s not a celebrity. He’s a punchline.

A spokesperson for Damon, who didn’t reveal the due date, spoke with Us Weekly magazine, saying, “Everyone is excited.”

Damon and Barroso married in December 2005 after about two years of dating. He met her when she was bartending at a local Miami hot spot, giving waitresses and bartenders around the world hope for their Super Star Prince Charming. Their story also added new meaning to the Human League lyrics, “You were working as a waitress in a cocktail bar, when I met you.”

The Oscar-winner has said his wife and kids are what keep him grounded. “My wife is a very wise and a very thoughtful person. Hopefully, [the kids will] inherit that,” Damon said. “From me, I hope they’ll inherit a sense of social justice and a desire to continue some of those programs that I’m involved with.”

Don’t forget those dazzling blue eyes, your impish grin, the ability to kick-ass as Jason Bourne and an adorable accent when you say “How do you like them apples?”

It would be great if they could inherit that too. Congratulations on the new addition!