One the most beloved icons in Hollywood, if not the world, had been imperiled. 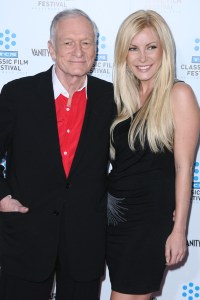 No, we’re not talking about Sandra Bullock.

The city’s namesake sign, an image that’s become synonymous with glamour, fame and fortune, has been at risk of being ruined by developers who would malign an American landmark as recognizable as the Empire State Building, in favor of building totally unnecessary, overpriced housing behind it.

Apparently someone didn’t get the memo about this being the worst slump the market has seen in decades.

The Trust for Public Land recently did everything they could to rally community support to raise the $12.5 million needed to purchase the land behind the Hollywood sign, including covering the letters with huge sheets that read: “Save the Peak.” Still, the group came up $900,000 short of the purchase price for the 138 acres the morning of April 26.

That’s when Hugh Hefner swooped in and saved the day, ensuring the land will remain unspoiled. There couldn’t have been a more appropriate savior to make certain something would remain bare.

This isn’t the first time Hef has rescued the most famous billboard in the world. Back in 1978, when the sign was in serious disrepair, he threw a gala fundraiser at the Playboy Mansion, auctioning off letters to celebrities for $27,700 each. Gene Autry purchased the L, Alice Cooper took the O in memory of Groucho Marx and Hef picked up the Y.

This time donations to save the Cahuenga Peak came from luminaries like Tom Hanks and Steven Spielberg, as well as private citizens and corporations like Tiffany & Co. Someone who seemed totally uninterested in being proactive in saving the Hollywood sign was the Governator, Arnold Schwarzenegger. He did pop up for the first time on the morning of April 27 for a photo-op and some grandstanding. Schwarzenegger quipped, “The Hollywood sign will welcome dreamers, artists, and Austrian bodybuilders for generations to come.”

Meanwhile, the real hero of the day, Hefner — who calls the sign “Hollywood’s Eiffel Tower” — reported the sign holds a special place in launching his own personal dreams. “My childhood dreams and fantasies came from the movies, and the images created in Hollywood had a major influence on my life and Playboy.”

Read on for more Hugh Hefner