American Idol won the ratings war last week over Dancing with the Stars, but numbers are down and water cooler chatter over America’s favorite competition has taken a turn. Instead of raving about the show, fans are muttering over whether this is in fact “the worst season yet.” We ask: What’s going on with American Idol?

Do a web search for “American Idol worst season” and you’ll see a number of stories questioning the merits of season 9, going all the way back to February. Actually, there are a few postings going back to 2009, which reflect a general feeling that the show has gone through a decline. Clearly, there’s something in the air this year. 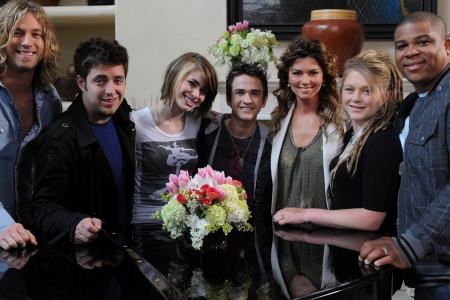 Committed fans claim season 9 has been rife with inconsistency, whether you’re gauging the level of talent, rules of engagement or the judge’s feedback. Fan fury hit a high note at both the final 24 and then the final 12, with favorites not making the cut.

One of the biggest complaints is that there are no performers to cling to among the contestants, let alone a single stand out. Also, is there anything worse than watching performers botch untouchable songs from The Beatles or The Rolling Stones?

The show is back to winning Tuesday and Wednesday nights for their timeslot, but the numbers don’t match up to former seasons. Last week’s Idol Gives Back came in 16 percent lower than 2008’s comparable telecast.

The night of Idol Gives Back, Jimmy Kimmel spoofed the show for his late night audience by promoting the follow up special, Idol Gives Up, which promised “more mediocre singing.”

The View has also been slamming the show this season. Back in February, the ladies and former guest judge Victoria Beckham slammed Idol for airing the contestants’ begging and Sheri blasted Idol for playing with contestants’ emotions. Then last month, with Elton John in the house, the women discussed how “wacky” the judges have been behaving.

This tide of discontent won’t bode well for the show next season, when it tries to find new footing without Simon Cowell, who is leaving to create the X Factor. Also leaving is band leader Rickey Minor, who is heading over to jam for The Tonight Show with Jay Leno.

Then again, the show is still taking their Tuesdays and Wednesdays timeslot and maybe some new judge energy is just the kind of shakeup it needs to kick things up for season 10.

What’s your take on this season? Leave a comment below to let us know.