Moore and Redlener exclusively spoke to SheKnows Entertainment about the important role the Oscar-nominated actresses’ reach sends the fate of children’s healthcare firmly onto the public’s radar. 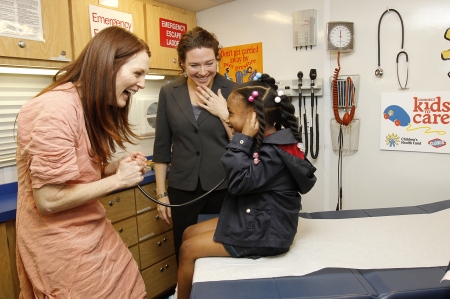 She may have been nominated for an Academy Award for Far From Heaven, The Hours and The End of the Affair, but it is Moore’s lifelong passion for all things altruistic that most impressed SheKnows. It was evident from the get-go this military kid grew up believing in the power of America when it bands together to an issue that threatens us all. With the American healthcare system dominating the news, Moore would not miss the opportunity to lend a hand to improve the healthcare of every American child.

After meeting with New York City children who have beaten the odds because of their access to healthcare through mobile health units funded by CHF, the duo were clearly glowing for the promise of true healthcare reform, regardless of what elected leaders do in Washington.

Moore on the health of our children

SheKnows: How was the event at the hospital?

Julianne Moore: We had a blast and we’re exhausted (laughs). It was great and the kids were adorable. It was really a lot of fun. We just finished a photo op (exclusively for SheKnows!) and the kids, the kids were very, very patient. Then, the little ones started falling down and that was it (laughs).

SheKnows: I know both of you are extremely motivated behind this project, but do you get an extra bolt of energy after a visit like today?

Julianne Moore: Oh my gosh, yes! It’s one thing to talk about families and healthcare and whatever. But, when you actually meet the children, when you see them, the kids who are benefiting from this, these kids today were so lovely and so well behaved. So well cared for and with parents who really cared about their well-being, and are anxious to get the healthcare these kids deserve. You put a face to this kind of stuff and it seems ridiculous that we don’t have more of these opportunities.

SheKnows: We have health care now in this country, it is law. But, there is still a long way to go, Julianne, why was it important for you to jump on this wave right now?

Julianne Moore: Well, it’s one thing to say that we want to get healthcare to everybody in the Untied States, but it’s another thing to provide it. There are plenty of places where this simply no access to it. In New York City, they have three of these mobile healthcare units that go from shelter to shelter and come to people who can’t go to healthcare themselves. They also have them all across the country in places where there are no doctors. Or, maybe there’s one doctor and you have no transportation. So, in theory you say, look, here it is, but if it’s not available (laughs), people are not going to get the care.

Karen Redlener: We try to make a differentiation between healthcare insurance and healthcare. What this health reform did is help to make sure most everyone will have health insurance. Now, we really have to make sure they get healthcare. That’s what Julianne was talking about, making sure there are doctors in all communities.

SheKnows: Would you both say that is one of the main issues that maybe aren’t being addressed enough? The fact that access to doctors in certain areas remains out of reach.

Karen Redlener: I think it’s a very important element to children receiving healthcare. There are something like 4,800 health professionals shortage areas in the United States. That means there are not enough doctors in those counties or communities to meet the needs of everyone in that area. Especially when you’re talking about low income, families under the poverty guideline, those communities have even fewer resources. What the Children’s Health Fund has done is really develop programs at the same time as advocating for access to care for all kids. We have 24 programs in our national network, but certainly the country needs a lot more than that. We’re trying to expand our reach.

Julianne Moore: One of the things that is amazing with this program with Clorox is that you can go to Clorox on Facebook page and become a fan. They will donate a dollar. A dollar for everybody who does it that will add up. Not only, obviously for the program, but also it raises awareness of the program. This is something people don’t know about. We the community, through a social network, that can benefit so many — is great.

SheKnows: It’s also great that it doesn’t cost anybody anything.

Up next, an action story this Hollywood A-lister had to join.