Paternity has become one of the lead controversies stemming from Kitty Kelley’s unauthorized tell all, Oprah: A Biography. Oprah isn’t having any of it. 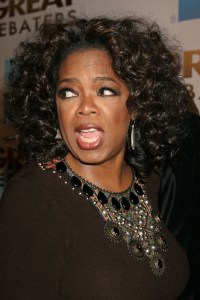 “I will not be taking a paternity test, ever,” Oprah told a reporter. “I know who is claiming to be my real father.”

She was referencing Norh Robinson, an 84-year-old Navy vet and former farmer who has recently claimed to be her long lost daddy. According to Robinson, who lives in a VA hospital, he actually contacted her before the hubbub and just wants a chance to know his daughter.

After the Enquirer broke the story a few weeks back, Robinson gave The New York Post an interview, revealing he wrote Oprah and offered to take a DNA test for her years ago.

“I told her, if she wanted, I’d give her one,” Robinson told The Post. “I never got no answer. I’m her real father. I haven’t seen her since she was a kid. She was a little bitty thing.”

It seems Robinson may not be the only one speaking out.

“Last week was a rough week for Gayle [King] when a so-called biography came out,” Oprah said at the Matrix Awards last week. “Every day, she’s getting herself more and more worked up about all of my new daddies that are now showing up. New daddies who are saying: Hello daughter, call me, I need a new roof. Well, this too shall pass.”

Oprah was raised by single mom Vernita Lee, 75, and shares a last name with her pseudo-stepdad, Vernon Winfrey.

The Enquirer broke the paternity story claiming to scoop Kelley’s tell-all, which promises her paternity as one of its major scoops.

With her new book about the daytime queen, however, Kelley claims to have gotten the shaft from the media, with many networks refusing to interview her or give her publicity. She may not be getting the interviews, but we have to argue she seems to be getting quite a bit of exposure!

Word is Kelley’s biography relies on 850 interviews and paints Oprah as generous, but also nasty, aloof and self-centered. “She may be admired by the world, but I know the truth,” Vernon Winfrey told Kelley. “So does God and so does Oprah. Two of us remain ashamed.”