Fans of Poison, Rock of Love and Celebrity Apprentice had their fingers crossed for Bret Michaels this weekend. The rocker turned-reality star suffered a brain hemorrhage late Thursday and though he’s awake and communicating, he still remains in ICU. 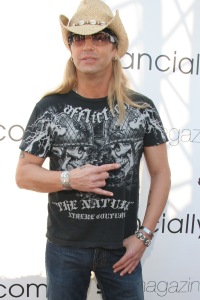 What started as an excruciating headache escalated into a life and death situation for Michaels, 47, who was rushed to the hospital on Thursday. This just a week after the type 1 diabetic had an emergency appendectomy!

Doctors found Michael’s had had a massive brain hemorrhage, which translates to bleeding at the base of his brain stem. By Sunday, Michaels was awake, but still in critical condition.

“He is under 24 hour doctors’ care and supervision,” Michaels’ website and Facebook page reported. “We are hopeful that further tests will locate the source of the bleeding, which has still not been located. As we all know Bret is a fighter and we are hopeful that once all is complete the slurred speech, blurred vision and dizziness, etc. will be eliminated and all functions will return to normal.”

A new update on his sites today, Monday, April 26, reads: “Once again we can’t thank everyone enough for all the well wishes and prayers being sent Bret’s way! As of now Bret remains in ICU under 24 hour surveillance. Further testing this week will help locate the source of the bleeding. Look for an official medical report from doctors this week at BretMichaels.com. Please remember Bret is, and always has been, a fighter and survivor and is under the best medical care possible. Thank you for your support, thoughts & concern!”

Words it that the fact that he’s speaking is good tiding, but that’s just speculation.

Michaels has been a recent contender on Celebrity Apprentice and has proved to be quite an idea man. The show closed the last episodes by sending Michaels best wishes, while main-man Donald Trump apparently released a statement to RadarOnline.

“I am deeply saddened to hear about Bret Michaels and my thoughts and prayers are with him and his family at this time,” Trump said. “He’s a great competitor and champion and I hope he will be fine.”

Updates have are being coming on Michaels’ official website and Facebook page. Due to the overflow of traffic, it’s near impossible to get his site to open, but the Facebook page seems to be working fine.

Meanwhile, gossip sites are quoting sources and offer more info on Michaels’ status, but Michaels’ website warns to be wary of such reports.

“I want to clarify that the media has been interviewing numerous people over the last few days,” his tour manager Janna Elias posted. “None, and I reiterate, none, of the people that have been interviewed are neither authorized representatives nor do they have the right to speak on Bret’s behalf. We have attempted to release authorized statements through our publicist so as to keep everyone up to date as information becomes available. I find it inappropriate that people are granting interviews to the media when they have partial or incorrect information, no right to nor our approval to do so. “

SheKnows is sending Michaels’ best wishes for a speedy and full recovery.