This week’s episode of South Park was severely censored due to death threats against the show’s creators. Problem is, Trey Parker and Matt Stone didn’t approve the changes. 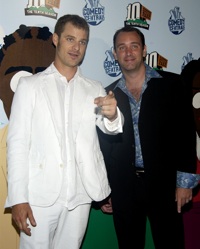 Parker and Stone don’t flinch away from scathing satirical depictions of everyone from Scientology and Tom Cruise to Barbra Streisand and Kanye West — but a planned depiction of the Muslim prophet Muhammad proved to be too much for network censors after a radical website made a thinly veiled threat against their lives.

Despite the fact that the show had already tackled a depiction of the prophet once (twice actually, if you count another episode that never aired), the extremist website basically threatened to have parker and Stone killed if they went through with the story line, referencing the death of Theo van Gogh. The Dutch filmmaker was killed in 2004 by a Muslim extremist angry over his Islamic documentary Submission.

The website post said, “We have to warn Matt and Trey that what they are doing is stupid and they will probably wind up like Theo van Gogh for airing this show. This is not a threat, but a warning of the reality of what will likely happen to them.” The site then showed a graphic death photo of the filmmaker and gave the physical addresses of both the Comedy Central studios and a home co-owned by Parker and Stone.

The icing on the cake: They then posted a video of a radical Muslim teacher calling for the “assassination” of anyone defaming Islam, complete with photos of Theo van Gogh, Trey Parker and Matt Stone.

The pair agreed to limited censoring of the episode when approached by Comedy Central brass, but the network later went back and took out an entire ending speech without Parker and Stone’s knowledge.

In a statement the pair said:

“In the 14 years we’ve been doing South Park we have never done a show that we couldn’t stand behind. We delivered our version of the show to Comedy Central and they made a determination to alter the episode. It wasn’t some meta-joke on our part. Comedy Central added the bleeps. In fact, Kyle’s customary final speech was about intimidation and fear. It didn’t mention Muhammad at all but it got bleeped too. We’ll be back next week with a whole new show about something completely different and we’ll see what happens to it.”

The network isn’t done, either. If you’re looking for the episode online, you won’t find it. Comedy Central is busy making even more excisions.

“After we delivered the show, and prior to broadcast, Comedy Central placed numerous additional audio bleeps throughout the episode. We do not have network approval to stream our original version of the show. We will bring you a version of 201 as soon as we can,” a statement on the show’s website said.

Read on for more television