The Lohan family, better known as their own The Jerry Springer Show spin-off, had a brand new episode April 22 involving the police arriving at Lindsay Lohan’s apartment. 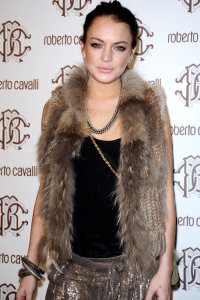 Continuing their public displays of addiction and dysfunction, Michael Lohan — Lindsay’s fame whore absentee father — called the LA Sheriff’s Department to report that his 16-year-old daughter, Ali, was staying with Lindsay and he was concerned for her safety.

Michael then went to Lindsay’s apartment building with police for a “welfare check” just in time for the paparazzi to swarm him playing the good parent.

Reportedly, deputies spoke with Ali at the apartment and decided she would be allowed to stay with her sister. That prompted Michael to head for LA County’s Department of Children and Family Services, per the advice of the Sheriff’s Department.

Apparently, it’s not Lindsay’s repeat DUIs, well documented drug use, reported eating issues, rage problems or career implosion that concerned Michael, it was the fact that Ali was in Lindsay’s car on the way back from Coachella this weekend and the car was going over 100 mph.

Mother of the Year Dina Lohan, who wants Lindsay to get a restraining order against Michael, got right in touch with TMZ, saying, “I was told by my attorneys not to speak because it is very serious and my ex could be in big trouble. He’s dangerous. If he can’t get to them, he is going to try to hurt them. It’s not good.”

Lindsay, as usual, took to Twitter, the only PR platform she can clutch to these days, Tweeting that she was angry at building management for letting the cops and her “ex-dad” in her apartment. She went on to remind the world of all kinds of Lohan dirty laundry.

One Lindsay Tweet reads, “Let’s not forget that my father kidnapped me from a court room when I was 4 years old and is crazy.” She goes on to say, ” He has never paid child support, and is marrying a tabloid writer and can barely spell his own name due to his “brain” that has been ruined due to his drug use. Thank G-d for my mommy. Without her, I wouldn’t even know myself.”

Yeah, because Dina Lohan is a really good role model!

How long can this entire family circle the drain before they’re finally mercifully sucked into the vortex land of obscure cautionary tales they’re all destined for? That clock is still ticking.