Heather Locklear has been cited for leaving the scene of an accident after plowing down a street sign in her ritzy neighborhood. 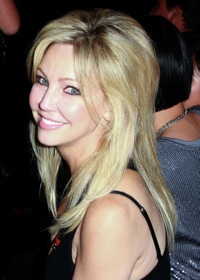 The Melrose Place actress is charged with misdemeanor hit-and-run after an early morning crash knocked down the sign.

A neighborhood resident called police in the late afternoon and reported hearing the crash around 4 am. The neighbor did not say why he delayed reporting the accident for so long.

Locklear’s black BMW was spotted on surveillance video with front end damage consistent with such a crash. Problem is, the footage is from hours after the neighbor reported hearing the noise, and there’s no way to prove Heather was actually driving at the time.

So, despite the footage and debris collected from the scene which matched Locklear’s Beemer, there’s still no actual proof Heather was driving.

Blair Berk, Locklear’s attorney, confirmed that the actress is the registered owner of the vehicle but said “it is not yet clear who was driving the vehicle.”

Locklear was arrested in 2008 for driving under the influence of prescription drugs after a reporter called the cops about her erratic driving. She pleaded guilty to reckless driving in January 2009. A judge at the Simi Valley Court will decide Heather’s fate on May 17.

read on for more heather locklear