Kate Gosselin is gone, at least from Dancing with the Stars. If only voting Gosselin off every TV show was this easy.

After five weeks of competition, the reality TV mother of eight was sent packing after yet another dismal, stiff, awkward trip across ABC’s Dancing with the Stars dance floor. While Gosselin was consistently scored low, her final foxtrot, a Breakfast Club-inspired number dubbed “catatonic” and “a stroll” rather than a dance by judge Bruno Tonioli, sounded the death knell from Gosselin and her partner, Tony Dovolani. 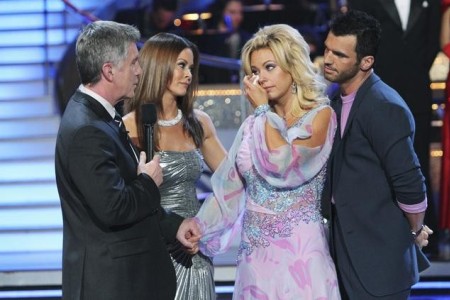 Gosselin broke down when they announced she’d be leaving the show, croaking, “I need a minute,” as she wiped away tears. Meanwhile, Dovolani couldn’t have looked more relieved to be rid of the partner he consistently clashed with, though he was gentlemanly enough to laud her during their farewell interview.

“We were going to go to a package [of clips], but let’s not,” Tom Bergeron said as tears continued to stream down Gosselin’s face — a producer no doubt screaming in Bergeron’s ear, “Don’t cut away! We’ve got Kate Gosselin in tears! This is ratings gold!”

In fact, many observers have speculated about the role producers played in keeping Kate, the dancer everyone loves to hate, on the show long past her expiration date. It’s a rhyme and a conspiracy theory!

Whether it was America or the producers who finally had enough of Gosselin’s pinched, ungraceful weekly offerings, everyone can breathe a massive sigh of relief that we won’t have to see that forced, painful smile ever again or her attempts at winning over America with her, well, “personality.”

One thing we couldn’t help but notice, usually the exiting dancer is swarmed on the floor by their fellow dancers as they say goodbye. Not Kate. Everyone stood on the stage behind her, looking appropriately somber, but no one rushed up to be by her side.

They were probably thinking the same thing we all were: Peace out, lady. Don’t let the door hit you on your way out.