Cameron Douglas, the son of Michael Douglas, was sentenced to five years in jail for his role in a drug trafficking ring. 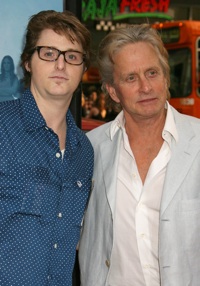 The younger ?Douglas was ?busted in August 2009 for possession of methamphetamines with t?he intent to distribute after a three-year investigation by the DEA. ?

The judge sentenced Cameron to five years in a federal prison, along with paying $25,000 in fines and serving 450 hours community service. Upon his release, he must spend another five years in a supervised release program. The 33-year-old actually got off easy, as he faced a ten-year prison term.

During the sentencing, Cameron apologized to his family (both Michael and mom Diandra were in attendance) for putting them through this “nightmare” and said in the future he would like to be a role model for younger siblings, ?s?u?c?h? ?a?s? Michael’s kids with wife Catherine Zeta Jones.?