Sandra Bullock has done an outstanding job of staying away from prying eyes since news of her scumbag husband Jesse James’ numerous infidelities landed on every newsstand, radio station, TV show and website in creation last month. 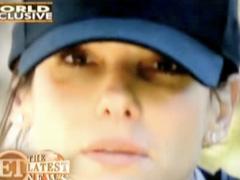 Now Entertainment Tonight has the first images of the Oscar winner and she isn’t wearing her wedding ring.

The photos, taken last Friday when Bullock went for a hike in Northern California, set off an internet gossip firestorm, questioning the future of the actress’ marriage to her bad-boy biker husband who, she said through tears of joy during her Golden Globes acceptance speech for The Blind Side, was the first person to ever have her back.

In the 33 days since bombshells of McGee began falling on Sandra and Jesse’s marriage, Bullock, 45, hasn’t been seen in public.

Now, after four more women have come forward alleging affairs on top of the 11-month relationship James carried on with tattoo model and all-around menace to society, Michelle “Bombshell” McGee, the photos seem to cement what everyone’s been speculating; that Bullock’s marriage is over.

One thing is very clear, Bullock was fully aware that she was being photographed, looking directly at the camera several times. Considering her ability to stay off the radar for over a month in a media maelstrom, you have to assume she wouldn’t be seen unless she wanted to be seen in order to send a message.

The ring’s gone and the man will likely follow.