Larry King’s eighth divorce is on hold, reported his attorney. 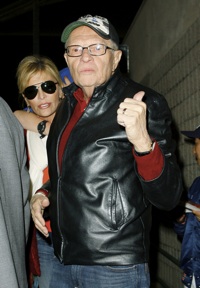 Larry King and maybe ex-wife Shawn Southwick might be trying to work things out.

After a blowout fight caused by Southwick’s suspicions that King is cheating with her sister, both parties quickly filed divorce papers with their respective lawyers.

King even went so far as to try to nullify a property transfer he made to Southwick several years back.

But after King and Southwick were spotted clinging to each other at their son’s Little League game over the weekend, it seems the couple may have had a change of heart.

The couple decided to see a marriage counselor in a last ditch effort to iron out their differences. “Larry and Shawn met with the counselor today,” says King’s lawyer Dennis Wasser. “It was decided that there will be no divorce activity for two weeks as several issues need to be discussed and resolved.”

Neither party have withdrawn divorce papers. Lawyers for Southwick and King are still fighting over dirty details like the post-nup Shawn somehow convinced Larry to sign giving her the above-mentioned properties and declaring all his assets community property.

Will Southwick stay with TV talk’s King? If her lawyers don’t succeed, Shawn will probably suck it up like a good gold digger and get as much as she can out of remaining married.