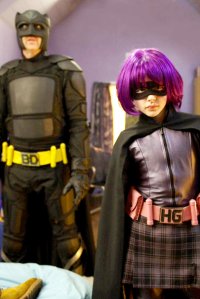 In a repeat of last week’s early box office misfire, a morning’s worth of news stories reported the wrong winner. With the official report out, Kick-Ass hauled in $19.8 million to Dragon‘s $19.6 million. That’s not a huge lead, but certainly affords Kick-Ass the crown.

Based on the comic series Kick-Ass, the violent comedy about everyday teens-turned-superheroes had gotten a lot of hype. Many box office experts had projected the movie would bring in twice its actual opening take, but it just didn’t get the, well, Kick-Ass opening it was hoping for.

How to Train Your Dragon, meanwhile, has more than exceeded expectations in its fourth weekend. The 3-D DreamWorks Animation hit premiered in first place, but dropped to number three last week. Clearly, viewers weren’t done with it. The film has grossed $158.6 million thus far.

Based on the April 9 through 11 projected numbers, the battle for third was equally as tight as for the top spot. Steve Carell and Tina Fey’s Date Night held on with $17.3 million. The new release Death at a Funeral, with Chris Rock, Martin Lawrence and Tracy Morgan, came in a mere $300,000 behind for fourth.

Clash of the Titans took fifth with $15.7 million.

It was a big financial drop into the bottom five. The Last Song brought in $5.8 million for sixth, while Tyler Perry’s Why Did I Get Married Too? took $4.18 million for seventh.

Next week, the much anticipated release of The Losers, starring Jeffrey Dean Morgan and Avatar‘s Zoe Saldana, hopes to take the box office crown. Jennifer Lopez’s The Back-Up Plan may inspire some ladies’ nights and also land in the top five, but the chick flick isn’t likely to take number one.