On l?ast week??’?s? Glee??, Sue Sylvester showed viewers she can Vogue. April 20’s Glee dedicates an entire episode to America’s favorite Material Girl: Madonna! Sue and Will aim to empower the McKinley High’s girls and are sure Madonna is the icon to do the inspirational trick.

In The Power of Madonna episode, airing at 9 pm, Will (Matthew Morrison) believes the Glee girls need to stop letting the guys push them around. He also wants the guys to learn that misogyny is not the way to go, so this week’s club assignment is to reinterpret a Madonna hit and hopefully, take to heart Madge’s musical message of equality. 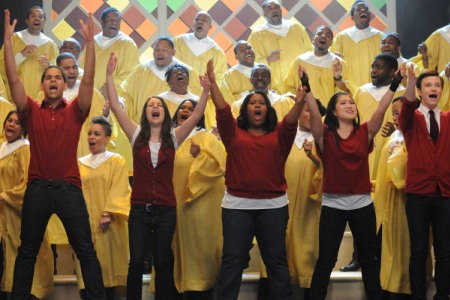 Meanwhile, Sue (Jane Lynch) turns to Madonna to inspire her Cheerios, but new cheerleading recruits Kurt (Chris Colfer) and Mercedes (Amber Riley) decide she’s the one who needs a confidence boost. To that end, they give cranky Sue a Vogue-alicious makeover!

“This episode is our love letter to Madonna, an artist who has inspired me all my life,” said Glee head honcho Ryan Murphy. “The hardest part was having to choose which songs to include from her incredible catalogue, as there were so many we wanted to do. We send her our thanks for her generosity with her music.”

Word is, Madonna got a hold of the big episode early and has given it her seal of approval.

“Brilliant on every level,” Madonna raved to Us Magazine. “The dialogue and the entire script was genius. I completely appreciated the layers of irony, especially when all those macho boys sang What It Feels Like For A Girl. I also loved the fantastic performances of Vogue, Express Yourself and all the messages about the boys being respectful to girls.”

If you missed the video, check it out here.