Fresh from her breakup with football star Reggie Bush, Kim Kardashian has reportedly been making the rounds with several international soccer stars. 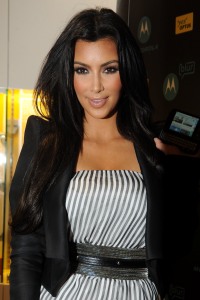 After Kardashian’s three-year relationship to American football star Reggie Bush fizzled at the end of March, it was reported that Kim was getting cozy with Manchester (UK) player Wayne Bridge.

Kardashian quickly took to Twitter to dispel that rumor, Tweeting, “Who the hell is Wayne Bridge? LOL Someone please fill me in because I have no clue.”

Obviously there’s a “That’s what she said” joke right there — but we’ll keep it classy in Kim’s honor.

The Keeping up with the Kardashians reality star was reportedly seen out for a romantic lunch with Ronaldo at a restaurant called La Dorado in Madrid, Spain.

Though they left the restaurant separately, Kardashian was said to have driven to Ronaldo’s mansion later that same day.

While this could be a case of rebound romance, it is more likely Kim’s got a case of revenge tabloid love. Right after they split, Kardashian’s ex, Bush, was photographed partying at Tao in Las Vegas with Kardashian’s one-time BFF, Paris Hilton.

Interestingly enough, Hilton hooked up with Ronaldo back in the summer of 2009!

Kardashian and Hilton have a long standing rivalry. Once besties, Paris is rumored to have ended the friendship when Kim became more famous by using an old Hilton maneuver, the “leaked” sex tape. There’s no way to renew a feud like a good tabloid cat-fight over ex-boyfriends and both of these publicity hounds know it.

Whether Kardashian’s romance with Ronaldo is real or staged, there’s little doubt she’ll have any trouble finding a new man now that she’s single. Have you seen the tastefully nude beauty shot of her in May’s Harper’s Bazaar? That body won’t be lonely for long!

No Offense Dads, But Hilary Duff’s Mom & Kids Only Vacation Sounds Like Heaven