Carrie Underwood took home the Entertainer of the Year prize at the Academy of Country Music Awards, and in doing so made history. 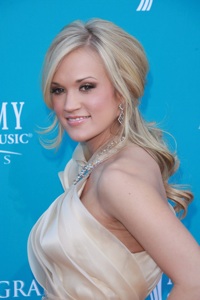 The American Idol winner is the first woman to win Entertainer of the Year twice.

“I think I just got makeup all over Brad Paisley,” Underwood said after accepting her trophy in a short and sassy white dress.

“Thank you, God, praise the Lord.”

Earlier in the evening Underwood was recognized for winning the trifecta of awards over the course of her short career: Entertainer of the Year, Top Female Vocalist and Top Newcomer.

Luckily Underwood was able to enjoy her moment in the spotlight, because she did not win in any other category for which she was nominated.

Neither did Taylor Swift.

Despite being nominated for five awards, Swift went home empty-handed after putting on a stellar performance of Change that included ripping of her virginal white dress to reveal a black outfit, soaring over the crowd on a floating platform and singing with college a capella group the Tritones. 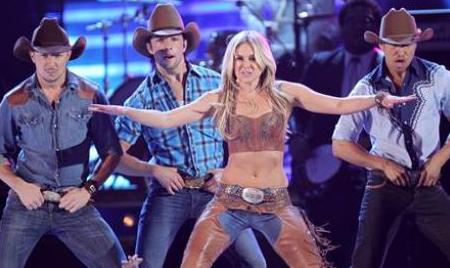