Susan Spungen may have the best job in the world. Her culinary mastery comes in quite handy on film sets such as Meryl Streep’s twin 2009 hits, It’s Complicated and Julie & Julia. It’s Complicated debuts on DVD and Blu-ray April 27 in time for Mother’s Day! 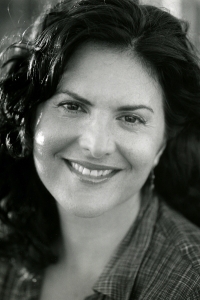 Spungen was tapped by the usual means of finding a job — whether Hollywood or Hyde, New York — and that is networking.

It was the food consultant’s job to make each scene breathe with life when it comes to the culinary requirements. Whether it was Streep’s bakery to make chocolate croissants for Steve Martin or a dinner party scene in the film that had our readers sending in requests for recipes, food clearly permeates It’s Complicated.

Guess what? We have one of those movie recipes that had you salivating!

SheKnows: How does one become a food coordinator for film?

Susan Spungen: Kind of fluky, actually! I worked first in the food industry and then the publishing side of the food industry for Martha Stewart Living for 12 years, I was the food editor. When I left there in 2003, I sort of embarked on a freelance career, the backbone of which, my bread and butter, was doing food styling, mostly for print. My movie career, which you could call it now that I have worked on three films, started with Julie & Julia, which led to It’s Complicated. 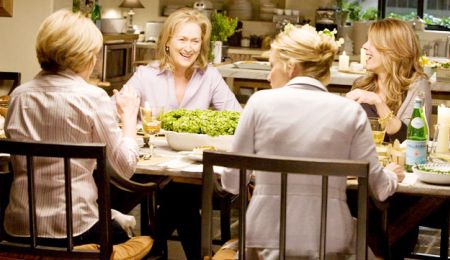 I had worked with a prop master named Diana Burton on Julie & Julia and she was the prop master on It’s Complicated, partly because she has done at least a handful of food movies. If it’s simple food, the prop master takes care of it, but when it gets to the level of It’s Complicated where the food is a more important element then that’s where they bring someone like me in. At the same time, apparently Nancy Meyers, the director, had admired my cookbook and said “I want this woman to work on the movie.” At the same time Diana Burton was saying, “This is the woman I want to work on the movie!” So it was certainly destined that I was going to work on this film.

SheKnows: Well after hearing this story, then it is a coincidence that Meryl Streep is in both!

Susan Spungen: True. It actually was a coincidence, it certainly wasn’t Meryl that asked for me but I was lucky enough to work with her on two films and have the great pleasure to get to know her and work with her closely, so that was a double pleasure for me. 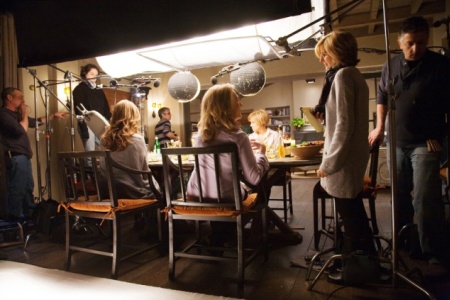 SheKnows: Is each scene one where you have to go into the head of what would this character make to eat?

Susan Spungen: That’s a good question because in some cases, the first two films that I worked on, some of the food is scripted where it’s important to the scene, obviously like making the chocolate croissant or in this case Jake’s favorite meal was the roast chicken and the chocolate cake, so those things were scripted. In the case of that meal that it turned into, the rest of the food was not scripted as well as in quite a few other scenes too. I did actually think, “How would this person cook?” She’s this earth mother that lives in California and I really tried to get inside her head and think how would I be cooking if I were shopping at the Santa Barbara farmer’s market.

SheKnows: With her career and what she does, the character, this is obviously a woman who has a passion for the culinary arts. When you created these meals, you obviously had to go to a recipe and you’ve written cookbooks, did you have to run them by Nancy? Did you have to make them and you had a taste test? 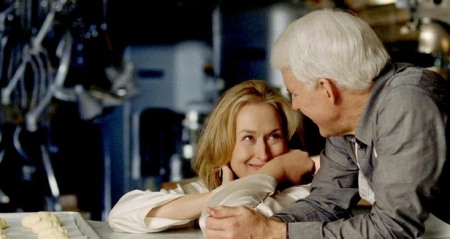 SheKnows: Because of the nature of the film Julie & Julia, talk about a culinary icon, and you, relatively new to working on movies — were you at all apprehensive or nervous about tackling the world of Julia Child?

Susan Spungen: Not really because I had actually met Julia and gone through her house in Cambridge. I also worked with her on the book Baking with Julia, which was shot as both a TV series and companion book. I had the great pleasure, again, of going up to Cambridge and working on that for a couple of days and having dinner — Julia cooked for us at her house! So there was a comfort level because I did know her when she was alive. I wasn’t looking at her at this icon. I mean, she is an icon, but I wasn’t afraid of her. I felt comfortable and happy to pay homage to her. 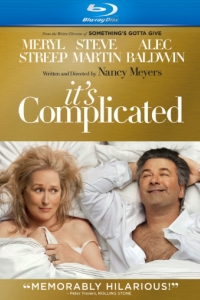 SheKnows: Lastly, what was it like being part of Martha Stewart Living as the founding food editor?

Susan Spungen: Well, that was obviously a great experience. It was a long experience and my defining career. It was something I did for a long time, for 12 years, so it’s hard to sum it up in a few sentences.

SheKnows: You got to set the template, in a way, by creating the test kitchen, right?

Susan Spungen: Absolutely. I did, yes.

SheKnows: I wanted to thank you, and do you have any more movie projects in the works?

Susan Spungen: Well I worked in Eat, Pray, Love which is coming out in August in the US. That’s the last of my trilogy for now!

Read on for our delicious recipe from It’s Complicated, a Croque Monsieur, and an exclusive clip from the film!

39 mins ago
by Sara Kitnick