Solo trips, a new attorney and no wedding ring could only mean one thing for Elin Nordegren: divorce! 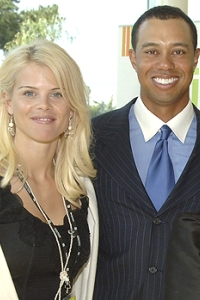 For those not interested in Tiger Wood’s bad attitude on the golf course recently at The Masters, there’s a new sport in gossip: The Elin Nordegren Watch! Reports have her refusing to wear her wedding ring, vacationing solo and seeing a new divorce lawyer.

It seemed that Woods and his misses were on the road to recovery, thanks to the progress they made in sex rehab. But with Nordegren having been spotted repeatedly without her wedding ring, new reports are that she’s finally thrown in the towel on their marriage. Many would say, “What took so long?”

The reasons, according to a steady stream of unnamed sources, are that Woods returned to the golf racket “too soon” and then did that controversial Nike ad, making it clear where his priorities lie.

“Elin was violently angry over this commercial and thought it was a cheesy thing to do,” a People source said. “She wouldn’t have gone near The Masters under any condition, but that just made her madder. She is over Tiger. I wouldn’t be surprised if she files for divorce sometime soon.”

While Woods came in a grumpy fourth at The Masters and wanted to take a family vacation, there was chatter that Nordegren said no and planned to vacation without him.

Then she hopped a plane to visit her ailing mother, Barbro Holmber — or did she?

What can be confirmed, is that while Woods was rounding out the Masters, Nordegren was boarding a plane to Arizona without the kids.

While we await the newest from all the Nordegren sources about on her doings on the mysterious trip, however, attention has turned to a visitor she had back in Orlando.

Word is Nordegren had an in-home meeting with a divorce lawyer that lasted “hours.”

“She’s switched lawyers,” a RadarOnline source reported. “Her new lawyer is from out of town.”

In one nice bit of news, there’s chatter that Woods has taken the kids on that family trip he sought so badly after losing The Masters. Of course, the other side of that news is that Nordegren is already planning another solo jaunt.

SheKnows has to admit there’s more action here than on the golf course, but we always remain cautious when stories come from unnamed sources and we’re guessing all this source-quoting isn’t much fun for the players.

That said, stay tuned — this story is far from over.