It’s been a big week for breakups in Hollywood with Mel Gibson serving as only the latest. 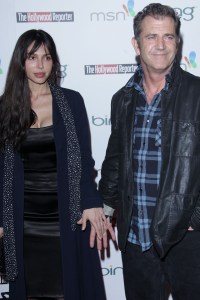 Larry King filed for his eighth divorce, Melissa Etheridge separated from her partner of nine years, and now word is Gibson gave the heave-ho to his baby mama, Russian pop singer Oksana Grigorieva. Gibson is dumping Grigorieva merely five months after they had a little girl named Lucia together.

As usual, People reports that the split was “amicable,” that the couple just “drifted apart.” Gibson and Grigorieva plan to raise their child together and “remain friends.”

We’ve heard that press release before!

After news of the split broke, all SheKnows could think was somewhere in the world, Gibson’s ex-wife, Robyn, is laughing hysterically and thanking the universe for a little something called karma.

In April of last year, after 29 years of marriage and seven children together (six sons and a daughter), Robyn filed for divorce from the aging action star. Just a few weeks later, Mel, 54, was hitting the red carpet with his new lady, Grigorieva, 29.

We’re not exactly a math whiz but considering Robyn filed for divorce a year ago and Gibson’s love child is already five months old, it seems pretty clear what the irreconcilable differences in their divorce might have been leading to those divorce papers being filed.

None of this should be all that surprising considering it’s coming from a man notorious for loathsome behavior. But the fact that Gibson’s split from Grigorieva, who also has a son with her former boyfriend, actor Timothy Dalton (aka, the fourth best James Bond), came so quickly on the heels of their child’s birth makes us wonder if there’s yet another lady waiting in the wings.

Does someone need to keep their Lethal Weapon in their pants?