Larry King is divorcing again. The CNN host is on his way to being the next Elizabeth Taylor as this is his eighth divorce. Including his current soon-to-be-ex, King has eight previous marriages, including marrying the same woman twice! 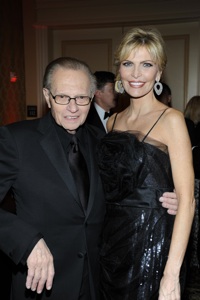 The 974-year-old King is ending his 13-year marriage to his seventh wife Shawn Southwick amidst allegations he had an affair with her sister!

While the papers filed by Larry say “irreconcilable differences,” Shawn believes Larry has been schtupping her sister Shannon Engemann for at least five years and cites the wildly expensive gifts Larry bought Engemann as proof.

On the list: a $160,000 car and lots of jewelry from Cartier. Shawn discovered the gifts when examining the statements paid by Larry’s business manager and became suspicious when she realized none of the jewelry came to her.

Engemann, for her part, denies the affair and basically says her sis is cookoo for coco puffs. “This is so ludicrous. She’s singling me out, but Larry has been nothing but generous to our entire family, including me.”

“Shawn has left me threatening messages,” Engemann told TMZ. When the National Enquirer ran a story suggesting the affair, Engemann said, “Shawn left me a message: If you dare sue the Enquirer I will pull out every last receipt that proves you had an affair with Larry. I’m tired for taking the rap for things. I did not have an affair with Larry. He’s been like a father to me.”

Witnesses say King and Southwick are known for having loud screaming matches, one of which was in the parking lot of an LA restaurant last year. The latest fight came the morning divorce papers were filed.

King’s ex wants three of the family homes — homes that he transferred to her name several years ago as a sign of his commitment to the marriage when Southwick first became suspicious of his behavior — as well as furniture and artwork. Larry is asking for the property transfers to be voided, saying it was only done for tax purposes.

Southwick — who looks the part of the quintessential gold digger with her lipo’d hips, plumped lips, dyed blond hair and pointy heels — stands to collect a fortune if the judge sides with her.

Hope you got an airtight prenup, Larry! One would hope after the first seven divorces you would learn!

Late Breaking News at 11 am: Word has emerged from Hollywood that Larry King did not have a prenup, stay tuned for how this goes for the CNN host!