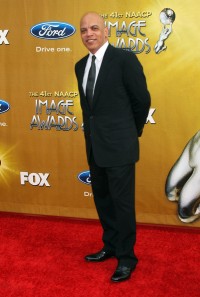 When Eubanks announced his exit April 12, speculation began over who would replace him. Some pointed to Hootie and the Blowfish front-man turned country star Darius Rucker, while others even suggested it would be Conan O’Brien’s former bandleader, E Street Band drummer Max Weinberg.

Instead, The Tonight Show has tapped a veteran of the music biz. Three-time Emmy nominee Minor boasted an impressive career long before serving as musical director of American Idol.

In addition to having a hand in producing the music for shows such as the Grammy Awards, the Super Bowl and the NAACP Image Awards (pictured at right), he’s also worked with megastars such as Whitney Houston, Christina Aguilera, Alicia Keys, Ray Charles and Beyonce. He also penned a professional memoir, There’s No Traffic on the Extra Mile.

“It is a privilege for all of us to have Rickey on board,” The Tonight Show executive producer Debbie Vickers said. “We couldn’t be more excited. The Tonight Show has a long tradition of acclaimed musicians in this role, and it’s great to now include Rickey alongside Kevin and Branford [Marsalis].”

Word is, Minor will continue to work with American Idol creator Simon Fuller on various projects, but a future with American Idol seems doubtful. That means American Idol is in for an even tougher transition in 2011 than expected. Not only will the show be losing Simon Cowell, but now it will ahve to find a new musical director, as well.

Meanwhile, Eubanks’ exit is not exactly a surprise. Since the shakedown with Conan O’Brien and Leno’s return to his old timeslot, many expected this, but Eubanks did not actually confirm those suspicions until he took a seat on Leno’s couch on April 12 and made it official.

“After 18 years, I just need a change of pace and to see what else is going on,” Eubanks said. “But it’s a really difficult decision because this has become my second home, as it has been for the band. I love the audience, and the American people really love the show. It’s been a wonderful experience. After 18 years of playing America into commercials, I’m gonna go somewhere where I can finish a song.”

That same day, O’Brien announced his new show on TBS. There’s no word yet on who will play bandleader in his new home. Many are hoping he’ll bring back Weinberg, but wouldn’t it be a kick if it were Eubanks?

Eubanks’ last night on the The Tonight Show is May 28. With the American Idol finale scheduled for May 26, Minor is expected to debut in his new role on Monday, June 7.