Many expected Conan O’Brien to land on Fox after the shakedown with NBC, but Coco is taking his late-night act to a whole new place: TBS. 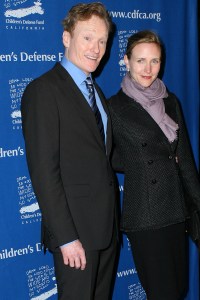 “In three months, I’ve gone from network television to Twitter to performing live in theaters. Now I’m headed to basic cable,” O’Brien said in a statement. “My plan is working perfectly.”

He also took a stab at himself via Twitter: “The good news: I will be doing a show on TBS starting in November! The bad news: I’ll be playing Rudy on the all new Cosby Show.”

Thanks to O’Brien’s $45 million settlement with The Tonight Show, he’s barred from appearing on TV until September 1, but come November, he’ll be back on air and going up against Jay Leno, David Letterman and John Stewart.

The timeslot for his new show on TBS will be Mondays through Thursdays at 11 pm, leading into George Lopez’s Lopez Tonight.

Lopez, who averaged over 1.2 million viewers his first season, is getting bumped back to the 12 am hour to make room for Coco, but he doesn’t seem to mind. In fact, word is, he personally called O’Brien to help lure him to TBS.

“I can’t think of anything better than doing my show with Conan as my lead-in,” said Lopez. “It’s the beginning of a new era in late-night comedy.”

While negotiations surrounding O’Brien’s buyout deal with NBC were infamously long, public and ugly, coming to TBS was more of a hush-hush whirlwind. It took less than two weeks to close the deal, which apparently gives O’Brien creative freedom, a big budget and, through his production company, ownership of the rights to the show.

“Conan has been the comedic voice for a generation,” said Steve Koonin, president of Turner Entertainment Networks. “TBS already has a huge audience of young comedy lovers, and Conan’s show will give these fans even more reasons to watch our network.”

We have a few months to go before that, however. In the meantime, O’Brien is keeping busy on the road. The standup comedian has gone back to his roots with The Legally Prohibited From Being Funny on Television Tour, which kicked off this week.

Here’s a clip from the road of O’Brien performing his own version of the hit I Will Survive.