The cast of Desperate Housewives banded together to deny claims that producer Marc Cherry assaulted Nicollette Sheridan on the Housewives set. 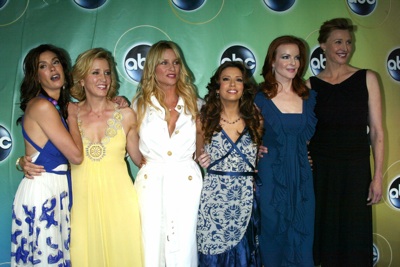 “It would be irresponsible of us to let the public believe that being a part of this show from its inception has been anything but a blessing,” the statement read.

“We have no first-hand knowledge of what Nicollette may or may not have experienced, but we would never characterize our set as a hostile environment. It is, in fact, the opposite. The friendships and support that Marc Cherry, the cast, the crew and the producers have shared for the past six years have made this a wonderful job that we are grateful for every day.”

In a lawsuit, Sheridan claims Cherry hit and belittled her and then had her fired after she complained to ABC brass.

Hatcher felt so strongly about her rebuttal — probably because Sheridan claimed Hatcher went to ABC with similar claims herself — that the current Desperate Housewives star issued her own statement on the matter.

“While my adoration and respect for the classic and dynamic chemistry of the characters of Susan and Edie is indelible, I’m honored to stand with Eva, Felicity and Marcia as a group and clarify that our set environment is nothing less than an amazingly positive experience,” Hatcher says. “I have never felt discriminated against. In fact, I have felt heard and respected by Marc and other executives in regards to both my professional and personal needs.”

So is Sheridan’s claim nothing more than sour grapes, or are the other Housewives afraid of getting the same Axe that slashed Nicollette from the show?