Michelle “Bombshell” McGee apologized to Sandra Bullock, but insisted she’s as much a victim of Jesse James’ deception as the Oscar winner. 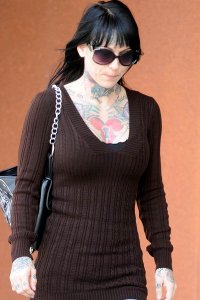 “Sandra, I’m sorry for your embarrassment,” McGee said during an interview with Aussie TV show Today Tonight. “I’m sorry all this is public. It is a heartfelt apology.”

“I know what she’s going through. She must be hurt, devastated, upset and embarrassed. I do feel really bad about it,” McGee added.

McGee, a model and mom, did the recent interview to tell her side of the story and “clear the air.”

As McGee told it, she and James met when she contacted him via MySpace for work. Things quickly escalated with personal emails and then text messaging.

Instead of landing a spot on West Coast Choppers episode as she hoped,  McGee landed a make-out session on the Choppers’ couch.

“We were intimate that night, probably two to three times,” she revealed.

The pair hooked up for about 11 months, always at West Coast Choppers. For a few months, they even saw each other a few times a week. McGee said the romance fizzled when James went to Europe for work. Yet, she reported James was still sending her text messages as recently as March.

“I was not in love,” she said. “I cared about him, as a friend. My feelings were growing. He’s cute. He’s a very charming man.”

However charming he may have seemed, however, McGee insisted the cheating was all James’ doing. She said James told her that with Bullock living in Austin, the superstar couple was heading for a divorce.

While she still feels guilty about being the other woman, McGee added that she’s glad she spoke out after seeing Bullock and James together at the Oscars.

“I feel better that she knows the truth about him,” she explained. “At the Oscars, I was really sad for her. When she said: This man really has my back. I’m like: No, he doesn’t have your back. He’s doing it behind your back. It’s just kind of gross.”

Having watched the Tiger Woods scandal unfold, McGee was ready for a press frenzy and said she wasn’t even surprised to learn there were more James girlfirends. McGee did not expect the backlash to hit her so hard. Being called a home wrecker isn’t the worst of it.

“My reputation’s been tarnished,” she said. “Especially with the Nazi, white supremacist stuff. It’s very hurtful to hear those over a silly photo shoot. I regret — in hindsight, I shouldn’t have done that photo shoot.”

McGee is intent on redeeming her reputation and this Australian interview seems to be her first step. The model says she will continue focusing on her career and her website, while also doing her best to continue being a good mom.

SheKnows is wondering what you think of all this. Leave a comment to weigh in!