Date Night ruled the box office this weekend, but it was a very close call. Early predictions had Clash of the Titans maintaining its reign from last week’s number one box office spot! But, in the end, Date Night came out on top. Meanwhile, How to Train Your Dragon stayed in the game while dropping to third place. 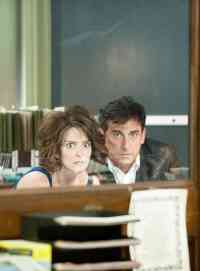 Tina Fey and Steve Carell fought their way to the number one spot this weekend, bringing in $27.1 million with their comedy Date Night. With the stars of The Office and 30 Rock headlining and a few fun cameos to boot, including Mark Wahlberg and Leighton Meester — viewers were lured to Date Night by the promise of laughs from the terrific tandem of Carell and Fey.

Audiences were also clearly still curious to see exactly what Clash of the Titans is all about, considering it missed the top spot by this much. The film’s stars — Sam Worthington, Liam Neeson, Ralph Fiennes and Gemma Arterton — didn’t hurt the film’s appeal either!

That’s so close that when final numbers come in later this week, we may even learn Titans actually held its place at number one! We’ll keep you posted.

How to Train Your Dragon came in just a tail behind the top two. The animated 3-D hit maintained its number three spot with $25.4 million, bringing it up to an impressive $133 million in 17 days.

Tyler Perry’s Why Did I Get Married Too? dropped hard from second place to fourth with only $11 million. That bumped the Miley Cyrus-Greg Kinnear vehicle The Last Song to fifth with $10 million.

Alice in Wonderland fell from the the top five, with 5.6 million. With $319.3 million total in 38 days, however, it’s Disney’s fourth highest-grossing movie ever, and counting.

Hot Tub Time Machine, The Bounty Hunter, Diary of a Wimpy Kid and newcomer Letters to God closed out the top ten, in that order.