Tina Fey returned to Saturday Night Live April 10 and brought along her best Sarah Palin. Check out the video below! 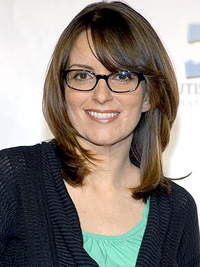 If you’re a Tina Fey fan, and hey, even if you’re not, you can’t deny the genius of her impeccable impersonation of Sarah Palin that she reprised for SNL on Saturday.

Don’t worry, this is one sequel that lives up to the original. Her spot-on portrayal included hilariously Palinesque moves such as reading from her hand as a cheat sheet and the occasional wink.

As Sarah Palin, Fey announced she’s the woman who changed the face of television. And ever since winning the silver medal in last year’s vice-presidential election, it seemed like the next logical step to launch her own network.

To connect with “regular folks from hockey moms to protestors dressed like Paul Revere, who are so overweight they picket from folding chairs.”

As the skit continues, she announces a lengthy line-up with fictitious shows like Are You Smarter Than a Half-Term Governor?; Dateline: To Catch a Levi Johnston; Dancing with the Real Stars: America’s Small Business Owners; and yes, who could forget, The Tonight Show with Jay Leno.

Read on for more Tina Fey