Elizabeth Taylor marriage jokes were all the rage in Hollywood once upon a time. What with the icon’s eight marriages, several of those a notable repeat, word is that Taylor is currently engaged to boyfriend Jason Winters, 29-years her junior. 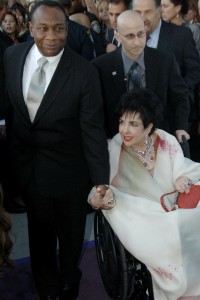 Winters is the lead of Sterling Waters Management, who recently signed Janet Jackson as a client. Taylor and Winters have not made the announcement public yet, but sources close to the couple admit that Winters has proposed to the Oscar-winner.

Although a former mainstay of the tabloid headlines, Taylor has managed to stay somewhat below the radar these last few years. It was in early 2007 that rumors began emerging from the Taylor camp that the actress was finding love once again, but with who?

When Winters and Taylor took a Hawaiian vacation together that same year many believe is exactly when the romance truly took off.

No word on a wedding date, but SheKnows Entertainment will keep you posted as soon as our invite arrives…

Lately Dame Taylor has been confined to a wheelchair and has not made too many public appearances. But, she did head out with her man recently for a charity fundraiser (picture above right) looking as in love as she was the first time she went down the aisle almost five decades ago.

Taylor’s most recent marriage, to construction worker Larry Fortensky, came to a screeching halt in 1996.