Sex and the City 2 premiered its latest trailer to the world giving further insight into the goings on of our favorite foursome starring Sarah Jessica Parker.

It appears that Carrie and Big are having a little difficulty in their relationship, as previewed in our first SATC sequel trailer.

The film arrives May 27 and SheKnows Entertainment could not be more excited. Stay with SheKnows for full coverage of the film including behind the scenes interviews and previews as the release date gets closer.

In the meantime, SheKnows has you covered with the latest Sex and the City 2 trailer! This is the film’s second preview, and gives fans a few more clues as to where the adventure for the fab four heads in their return to the big screen.

Celebrity cameos have been burning up the rumor mills, and the new preview confirms many of those rumors, including shots of Liza Minnelli and Oscar-winner Penelope Cruz having a word with Mr Big. Could Cruz be trouble for Big and Carrie?

Sex and the City 2 picks up two years after the first film and immediately one thing stands out more than a red dress at a funeral: Aiden is back! 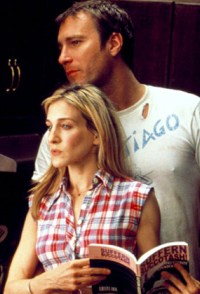 John Corbett announced earlier this year he would return for a small part in the SATC sequel and it appears that Carrie runs into Aiden on her trip to Dubai. Parker’s Carrie asks, “What Happens when you say, I do?”

But, does Carrie’s run-in with Aiden mean trouble for her marriage? “We bump into each other half way round the world — I think it means something,” Carrie teases in the trailer.

The arrival of Aiden honestly raises an eyebrow. We trust the filmmakers behind Sex and the City 2, but truly hope the return of a lost love for Carrie in Corbett’s Aiden is more than an excuse to cause dramatic trouble on screen.

It is the rule of sequels to up the ante — and we adored Aiden for Carrie back in the day — but of all the plot twists to throw at the married Carrie and Big, let’s just say we are equally intrigued as worried that Aiden’s arrival may fall flat!

The always professional Miranda is expecting, surely that lack of control will drive her nuts! Samantha’s fighting aging tooth and nail as only she can. But what about Carrie? Parker clues to that question during the trailer’s voiceover, “As for me and Big — we’re somewhere between wild sex and a baby.”

What was so impeccably charming about the first film and the series as a whole, of course, is the friendship of the four leads at the core of the Sex and the City franchise. Whether they are in Dubai or looking hot at home in New York, the ladies of Sex and the City always have us at “hello.”

After witnessing the new SATC trailer, look for sudden bouts of Cosmopolitan-itus accompanied with a fever for more Sex than can only be cured in May 2010.

Sex and the City 2 trailer

Read on for more Sex and the City