As news broke April 7 that Jon Gosselin is suing Kate Gosselin for custody of their eight children, Kate has fired back with… a new TLC show: Twist of Kate. 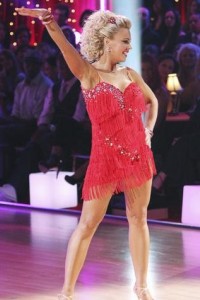 On Dancing With the Stars April 5, Kate struck out, albeit lamely, at the paparazzi with her dance to Lady Gaga’s Paparazzi.

Yet, merely days later, news has broken that Kate is returning to television to continue having those cameras zero in on her. Guess it just matters who is holding the camera, huh, Kate?

Kate is driving this year’s Dancing With the Stars ratings through the roof: The reality TV hit achieved a first by beating American Idol in the ratings this week!

It’s hardly a surprise, then, that TLC was quick to get the Jon and Kate Plus 8 follow up — Twist of Kate — out there and filming. A commencement date is still to be determined. Much of it will have to do with how far Kate gets on Dancing With the Stars. We’re pulling for her to go all the way because it is absolutely hilarious to watch her dance.

In his lawsuit, Jon Gosselin contends that Kate is not paying enough attention to the kids while she saunters through “dances” on DWTS. Will today’s announcement of a A Twist of Kate only help his case? Jon’s attorney, Anthony List, says, “[Kate] doesn’t have anywhere near the balance that she could have, because she’s looking for instant stardom.”

TLC promised that Kate’s new show will be a little different than the Jon and Kate Plus 8 formula. In Twist of Kate, the “twist” in the title refers to the reality star taking on other people’s lives to shine a light on how other people live. That’s fascinating, given the fact that Kate was one of those “other people” not too long ago.

“She’ll try out their jobs, see how their home life runs, see what they’re up against, and find out what they do to let off steam,” TLC said in a statement. The network promises Kate will “do what she can do to help.”

Don’t worry, Gosselin children fans, the Plus 8 may be visiting TLC again soon outside of their mom’s new show. TLC says Gosselin kids specials are in the works. Of course, all of the Gosselin children programming will have to wait until Jon’s lawsuit — in which he seeks to prohibit his children from being filmed — is settled.

39 mins ago
by Bonnie Azoulay