Woods’ Nike commercial has set off a maelstrom of debate, but perhaps the “father knows best” adage is true. Does that still apply when Daddy’s been dead since 2006? 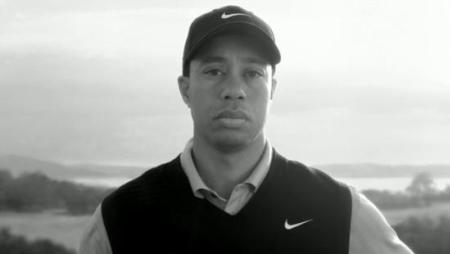 The 30-second spot features a cinematic black and white medium shot of a contrite Woods, blinking like a puppy dog who’s been smacked one too many times with a newspaper. Woods stares into the camera as it slowly creeps toward him. Unremarkable at first, but what’s got everyone talking is the voiceover that accompanies the footage.

Remember when Natalie Cole sang a duet of Unforgettable with her long deceased father, Nat King Cole, and a million father-daughter wedding dances were launched?

The Woods Nike commercial has the same feeling. But invoking a dead parent as a way to build support and foster good will can be seen as dirty pool, especially when it’s being used for an advertisement.

Jimmy Kimmel played the commercial on his April 7 show, prompting stunned silence from his audience until he quipped, “Well, that’ll make you want to buy shoes, won’t it?” and everyone erupted in hoots and applause.

But whether it’s beautiful art or great commerce, the new Nike Woods ad is basically a public spanking by a dictatorial father, and there’s nothing America loves more than that.

Interestingly, one major Nike component is missing from the ad: The company’s tag line. The words “Just Do It” in a Tiger Woods ad don’t have the right connotation anymore.

Also noticeably absent is one major fact in all the ongoing debate: Earl Woods was also a notorious philanderer. Hellooo… Like father, like son. If Nike were really smart, it would have ended the commercial with Tiger hollering, “I learned it by watching you, Dad!”

And… fade to black.