Sandra Bullock has broken her silence to deny the existence of a sex tape featuring her and estranged hubby Jesse James. 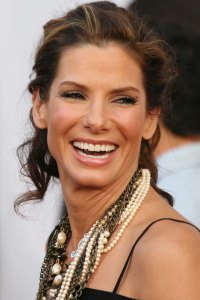 Controversial writer Ian Halperin says the Oscar winner got Dirty Sanchez-ed by a Nazi-hat-wearing Jesse, and it was all caught on tape. Sandra quickly took the opportunity to nip this rumor in the bud and spoke publicly for the first time since the scandal broke.

“There is no sex tape,” she told People. “There never has been one, and there never will be one.”

Those quick two sentences were the full extent of her statement. She did not address Jesse’s alleged multiple affairs or whether she is going to leave his sorry butt.

A rep for Jesse also says the rumor is bunk. “The claims of sex tapes are untrue and completely fabricated,” he said.

But friends say other tapes exist: Tapes of Jesse having sex with his mistresses. One even features Jesse’s favorite Nazi hat.

“What I saw was a naked woman on her knees and Jesse in a Nazi hat waving his arm in a salute,” says a source close to Jesse. “It looked like the woman’s hands were bound. He was shouting and singing and appearing to swig from a bottle of bourbon every now and then.”